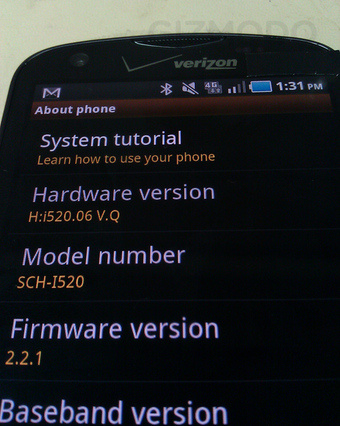 Could Samsung have a follow-up to its popular Galaxy S smartphone–released as the Verizon Wireless Samsung Fascinate–on U.S. carrier Verizon Wireless in the coming year? It looks like a Fascinate successor, this time without Microsoft’s Bing integration in favor of a more traditional Google experience, will be headed to the carrier’s 4G LTE network, and could potentially be announced in January at the CES show. Like the Fascinate, this model seems to be running Samsung’s proprietary TouchWiz user interface overlay and sports a front-facing camera. A shot of the device’s screen shows that the phone is running Android 2.2 Froyo, which would give it support for Adobe Flash 10.1 Mobile but isn’t the latest Android operating system, Android 2.3 Gingerbread.

For its part, Samsung already has a 4G Android smartphone in the U.S. with rival carrier Sprint in the form of the Epic 4G. The Epic 4G is a variant of the Galaxy S, but also adds a sliding keyboard in landscape orientation.