Back in 2009, I really wanted to find a great smartphone that allowed for dual sim cards. I wanted to be able to use the same phone for my work number and my personal number. This wasn’t anything far-fetched and it was actually pointed out when I made that post that there were already phones out there. The problem was that none of them were the type phone I wanted or needed. Earlier this year, Chuong posted about a rumor that the iPhone 5 might run a dual-sim setup. That would work for me!

It looks like I will be in luck soon though. In a press release yesterday, Samsung announced 2 such phones, the GALAXY Y DUOS and GALAXY Y Pro DUOS.

There are a couple of issues though, I no longer use a GSM carrier and these models are not slated for release in the US. According to the press release, the GALAXY Y DUOS and GALAXY Y Pro DUOS will be available in January 2012 but initially available in Russia. The GALAXY Y DUOS will be launched in Europe, CIS, Latin America, Southeast and Southwest Asia, Middle East, Africa and China gradually while the GALAXY Y Pro DUOS will hit Europe, CIS, Latin America, Southwest Asia, Middle East and Africa. 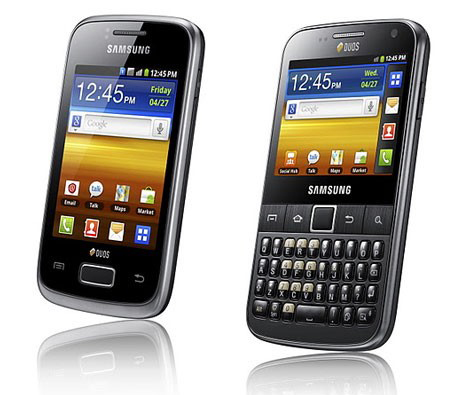 “With the tremendous success of the Dual SIM feature phones, we are now very pleased to be introducing the first Dual SIM smartphones powered by Android™. “We have been actively exploring this market and are well aware of the need for Dual SIM smartphones,” said JK Shin, President of IT & Mobile Communications Division at Samsung Electronics. “With the GALAXY Y DUOS and the GALAXY Y Pro DUOS, Samsung will be offering more choices for all consumers.”

The GALAXY Y DUOS is a slate phone and the GALAXY Y Pro DUOS has a small screen and a front facing QWERTY keyboard. They are both to run Android 2.3 (Gingerbread) and are powered by a  832MHz processor.

Can I get the Samsung Galaxy Nexus CDMA version with dual sim slots please? Maybe some of the other OEMs will follow suit!