The new Samsung Galaxy Chat is reminiscent of the Motorola Admiral in that it features a relatively small 3-inch touchscreen with a 240×320 resolution and a QWERTY keyboard below it. The phone looks like a BlackBerry device that runs Android 4.0 with Samsung’s latest TouchWiz UX skin.

As Samsung Tomorrow notes, the Galaxy Chat uses an 850MHz processor and its only camera is a rear-facing 2MP sensor. The phone isn’t meant for power users, however, so the specs make sense. 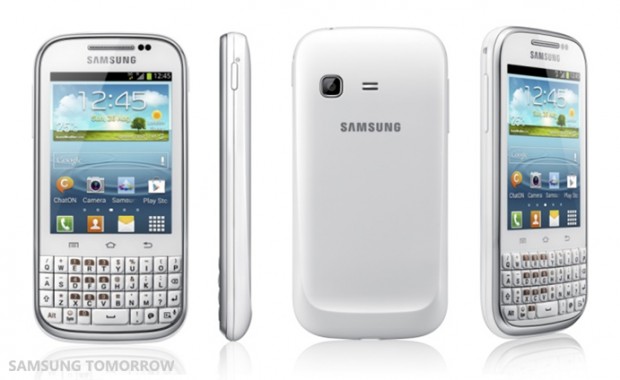 Samsung isn’t shipping the Galaxy Chat in the U.S. The phone ships in Spain this month, and will later make its way to other markets in Europe, Latin America, Middle East, China, Southeast Asia, and Southwest Asia. When the phone launches in those countries it will have a “competitive price point.”

As a phone designed for the emerging market the Galaxy Chat likely won’t make it to the U.S. at all during its lifecycle. Like Nokia’s Lumia 610 and Asha phones, this phone is for users who can’t afford expensive phones yet rely on phones for Internet access.

We’re sure, however, that Samsung could find a market for an Android device with a portrait physical keyboard in the U.S. With RIM flailing BlackBerry fans are likely looking for alternatives for when the once-dominant company folds. Many of those users are still using BlackBerrys because of the keyboards, and a Samsung Android phone with a good keyboard might convince them to switch.

Such a device would need much better specs than the Galaxy Chat, however.