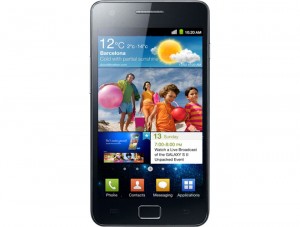 At Mobile World Congress, Samsung has announced the successor to the company’s flagship Galaxy S successor known as the Galaxy S II. The smartphone’s announcement was widely anticipated, and now we have more details about the dual-core smartphone that’s highlighted by the next-generation Super AMOLED Plus display that’s been announced on various Samsung Android smartphones that had debuted at CES.

The Galaxy S II features a dual-core CPU and support for HSPA+ connectivity with download speeds of up to 21 Mbps, which places the device into 4G category by definition of AT&T and T-Mobile.

As the device utilizes a dual-core 1.0 GHz CPU, the announcement confirms that the Galaxy S II won’t be using Qualcomm’s Snapdragon dual-core chipset, which is clocked at 1.2 GHz. Though Samsung did not disclose on its press release, the device most likely uses the company’s Exynos processor as the original Galaxy S uses Samsung’s own Hummingbird CPU.

The device features a 4.27-unch display with a 480 X 800 resolution, an 8-megapixel rear camera with autofocus and LED flash as well as a front-facing 2-megapixel camera.

In terms of physical appearance, the flat rectangular surface with rounded corners resembles the iPhone 4. There is still a small hump on the rear bottom of the device at the speakers. Also, Samsung’s TouchWiz proprietary user interface was upgraded to version 4.0. The device will ship with 1 GB RAM, which will give it plenty of room to multi-task and handle gaming.

“In 2011, we will take Samsung’s leadership in Speed, Screen and Content to a whole new level,” said JK Shin, President and Head of Samsung’s Mobile Communications Business. “With the GALAXY S II, Samsung wants to set the new standard of quality viewing on mobile, powerful performance, and slim and modern design.”

“GALAXY S II is a natural and powerful evolution of GALAXY S. Building on the phenomenal success of the original Samsung GALAXY S, we are proud to unveil the ultimate smartphone. Consumers no longer have to contain themselves – the Samsung GALAXY S II allows them to design their own smart lives.”

A Next Level of Viewing ExperienceThe Samsung GALAXY S II has been equipped with Samsung’s new crystal-clear Super AMOLED Plus screen, the most advanced mobile visual display ever created. Setting the standard of quality viewing on mobile, Super AMOLED Plus introduces the best in quality in color gamut, contrast ratio and edge sharpness. Using RealStripe screen technology and a greatly increased sub-pixel count, Super AMOLED Plus complements the mechanics of the human eye to recognize images look clearer and more detailed than ever before. With a wider viewing angle and increased visibility in outdoor, the Samsung GALAXY S II provides a more vibrant viewing experience than any other mobile devices.

Even with its unrivaled performance, the innovative Super AMOLED Plus display does not compromise battery performance. A significant reduction in power consumption from Super AMOLED display means it is also more energy-efficient than other comparably-sized devices, allowing Samsung to minimize device weight.

Samsung GALAXY S II Goes to WorkSamsung has introduced a new range of enterprise mobility solutions, expanding the business capabilities of the Samsung GALAXY S II and helping enterprise customers empower a flexible and connected mobile workforce. Samsung has partnered with IT industry leaders to offer the most relevant enterprise solutions to the Samsung GALAXY S II, working seamlessly on the Android Gingerbread platform and paying special attention to securing data and network. These solutions include enhanced conferencing and connectivity services from Cisco, the most comprehensive mobile implementation of Microsoft Exchange ActiveSync and secure remote device management from Sybase.

A New World of Entertainment and Smarter InteractionSamsung has selected the Samsung GALAXY S II as its premium mobile product with which to launch Samsung Hubs – integrated mobile applications designed to fit every element of your life. With Samsung Hubs, the Samsung GALAXY S II delivers rich catalogues of books and magazines, music, advanced mobile games and control of your online social life, all from a single device.

The Samsung GALAXY S II gives customers more choice in personalizing their smartphone experience. New for the Samsung GALAXY S II, Samsung has introduced Live Panel, a service that aggregates live web and application contents to a single customizable home-screen. Customers can design the lay-out of their own Live Panel, online services and mobile apps to appear on-screen. SNS feeds, information and many more applications can all be embedded and accessed instantly through the magazine-like layout.

With the enhanced voice technology on the Samsung GALAXY S II, customers will be able to do more with less. From opening the app to controlling the messaging, social media, email and calling, Samsung Voice Solution will recognizes voice and convert it to text and vice versa. Customized Voice Translation application makes the Samsung GALAXY S II the perfect travel companion, translating voice or text into – and from – a range of languages: simply speak a word or phrase into the handset and it will instantly translate it, with audio and text output.

For swift and simple device management, Samsung has introduced Kies Air. With Kies air, consumers can manage their smartphone contents from their PC, via local WiFi connections. download photos taken on the built-in camera, listen to music, check missed calls and send messages in the web browser on their PC. For added connectivity, WiFi Direct allows consumers to connect to wireless-enabled PCs and printers without the need for wireless access points. According to market requirement, the GALAXY S II is able to incorporate Near Field Communication (NFC) technology to support emerging mobile payment service and other services with mobile operators.