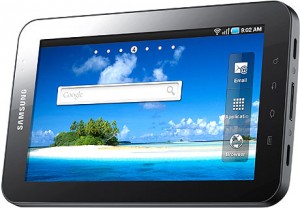 Samsung, which has seen success with its worldwide rollout of its Galaxy S smartphone lineup–which is available in the U.S. on all four major national carriers as the AT&T Captivate, the Sprint Epic 4G, the T-Mobile Vibrant, and the Verizon Wireless Fascinate–is projecting to sell 40 million smartphones in 2011, double the projection for 2010. Additionally, Samsung hopes to expand its tablet offerings, which is currently available as the Galaxy Tab, to include tablets of different sizes.

The company had previously stated that its goal is to sell 1 million Galaxy S tablets in 2010. That number is relatively small considering that Apple had managed to sell that number of iPads in the first 28 days being the first to market in the consumer tablet segment.

Moreover, a potential future tablet for Samsung could include a Super AMOLED tablet of the same 7-inch screen size, but of slightly higher resolution than the current LCD Galaxy Tab offering. The company recently demoed a 7-inch Super AMOLED display panel, and said that volume production will begin by summer 2011, making a fall refresh likely for the Android tablet.

I had a chance to play with a Galaxy Tab at CTIA last month, and although the tablet looks big, it can be held comfortably in one hand and can fit into a jacket pocket. The tablet is more portable than a 10-inch iPad, but still not as mobile as a smartphone.

The U.S. version of the Galaxy Tab is expected to be available on all four major national carriers and U.S. Cellular, a regional carrier. The company is also expected to be launching a WiFi-only version of the Galaxy Tab that won’t require a mobile broadband data plan and could be used in WiFi hotspot zones. The one factor that might impede sales of the Galaxy Tab at this point is that unlike iOS on the iPad, the Android 2.2 version that’s being used on the Tab isn’t tablet optimized, a fact that Google has admitted to. That means that asides from the customized applications–such as the email app in the above video–that are developed by Samsung, most applications will just scale up to fit the full screen, much like a larger version of the company’s Galaxy S smartphone. Without a special UI for developed apps to take advantage of the larger screen, there really isn’t much value added in terms of a tablet user experience for Tab owners right off the bat, though Google is said to be adding tablet UI elements to future iterations of Android; Samsung India has committed to Android Gingerbread and Honeycomb, the next two versions of Android that will succeed Froyo, upgrades for the Tab.