Following speculations that a new, limited edition and premium unannounced Galaxy Note 3 model with a flexible display will be coming to the market soon, one Samsung executive has already let the cat out of the bag and confirmed that the South Korean king of Android will be releasing a curved phone. That model is due as early as October in Samsung’s home country and could make it to other markets by early next year according to Samsung strategy marketing head D.J. Lee.

Earlier in the month, Samsung had announced two variants of the Galaxy Note 3, neither of which comes with a flexible display. The differences between the variants boil down to the use of processor, and HSPA+ or LTE for mobile broadband connectivity with the U.S. market getting the version with a Snapdragon 800 processor and 4G LTE support. 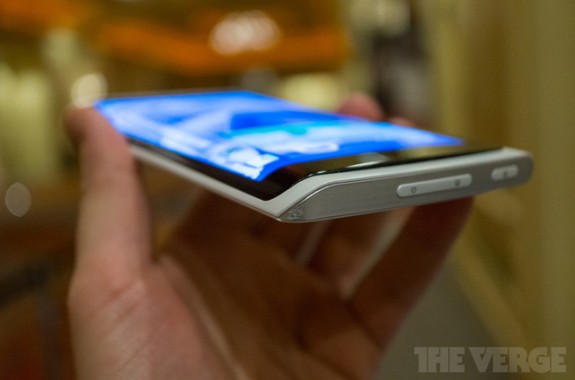 Is Samsung ready to commercialize its flexible display phone concept? Image via The Verge.

Lee, speaking to Reuters in an interview, did not give any other indications about the flexible screen. The vague reference to “curved display” may not necessarily mean that Samsung’s “next big thing” will bear a flexible display however as the company had experimented with phones with a slightly curved glass screen in the form of the Nexus S and the Galaxy Nexus in the past. Those models didn’t have a flexible display panel underneath though the screen had a slight curvature.

Still, a flexible display may in fact be coming. For several consecutive years, Samsung had been showing off working prototypes of such a concept at the Consumer Electronics Show and the market may finally be ready. Even if the phone itself doesn’t bend, roll, fold, or get reshaped to your favorite origami technique, the device promises better resilience to damage. Curved displays, made with graphene, may be able to sustain drops and dings better. The result? Broken glass screens may be a thing of the past, even if you’re still stuck with the same form factor.

Though tech watchers have been excited about the possibilities, Samsung still needs to commercialize the technology and ensure that it would withstand normal wear and tear when used daily by customers. It needs to ensure a high enough yield of the necessary components to place the device in a flagship product, like its Galaxy S series smartphones or Galaxy Note phablets and tablets.

At its best, curved displays can reinvigorate the premium smartphone market with new form factors. If the Galaxy Note phablet in its current design is still too big for your hands, imagine a phone that you can fold out like a napkin, or a tablet that you can roll up to save space as you take it with you to your next meeting. These are just some of the form factors that could be enabled with this technology when coupled with flexible batteries and circuitry made from the thin, but resilient graphene material. Beyond phones, flexible displays could open the doors to wearable computing devices as well, including the emerging smartwatch market.

Rival LG is also rumored to be experimenting with a phone with a flexible display as well.