There was a bit of uncertainty surrounding the Galaxy Note 8.0 announcement by Samsung at Mobile World Congress. It was unclear at the time if the diminutive tablet will run the tablet version of the Android operating system and support tablet-optimized apps, or if the 8-inch display will merely be another blown up display akin to an uber-large phablet or smartphone. Fortunately, Samsung Mobile has confirmed to GottaBeMobile that the Note 8.0 will indeed support the tablet-centric version of Google’s mobile operating system. 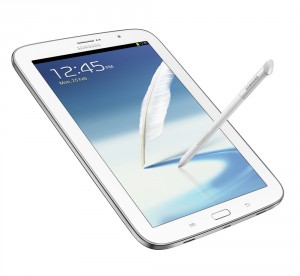 A Samsung spokesperson told us that the “Note 8 does indeed run tablet designed apps.”

This will be good news for multitaskers who are looking to do a bit more with the 8-inch 1280 X 800-pixel tablet display. With the larger screen real estate and the higher resolution display–relative to many smartphones on the market today–the Note 8.0 will support multi-panes in various apps and the screen display will be intelligently optimized so you’re not looking at a blown up smartphone app experience.

The downside is that at this time the number of tablet-optimized Android apps still pales in comparison to what’s available on Apple’s iPad and iPad mini.

The Note 8.0 is designed not only to compete with Apple’s premium-priced iPad mini tablet, which commands a $129 price premium over the competing Google Nexus 7, but the device is also expected to allow Samsung to move away from low-priced tablets in the sub-10-inch space. The device will have a larger display than a traditional 7-inch tablet, will allow users to make and receive voice calls over the cellular network in regions that support this feature, and will also support Samsung’s S-Pen for more accurate input.

An LTE-variant of the Galaxy Note 8.0 is expected to arrive in the U.S. market shortly, and hopefully American carriers will leave the voice calling intact for those who need or want that feature. Historically, U.S. carriers have stripped this feature from tablet products, but business customers may want to use the Note 8.0 as a speakerphone for conference calls in addition to enjoying the tablet functionality.