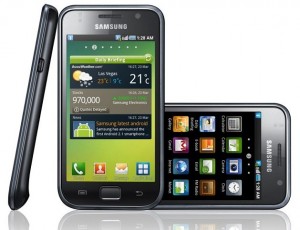 After Italian users were greeted with an early update to Android 2.3 Gingerbread on their 7-inch Galaxy Tab tablets, Samsung has finally gone on to officially confirm the Android system update to the company’s Galaxy series phones and slates worldwide. The company says that the update will initially launch for the UK and Nordic countries for the Galaxy S smartphone, but that a worldwide roll-out, to include the U.S., would happen eventually; Samsung failed to give a timeline on when users should expect to receive the Android 2.3 Gingerbread update, however.

In the U.S., the Galaxy S is available through all four major national carriers as well as a few regional carriers. It is available on AT&T as the Samsung Captivate, on Sprint as the Samsung Epic with its unique sliding QWERTY keyboard form factor and is the only model with 4G support through the carrier’s WiMax network, via T-Mobile as the Vibrant, and through Verizon Wireless as the Fascinate. The Galaxy S devices debuted with a 4-inch Super AMOLED display, a 1 GHz Samsung Hummingbird processor, and the TouchWiz experience with Samsung’s unique Daily Briefing widget, which combined useful news, stocks, and weather in a convenient widget and app.

The update is said to be beneficial for 3D gaming and video playback thanks to better OpenGL graphics support.

Unfortunately, though, Samsung’s plans are still vague and ambiguous. It’s unclear if the update will be rolled out to just un-branded devices or if it will arrive with those devices branded by carriers. As it stands, for updates to be rolled out in the U.S. to smartphones, it must be developed jointly by the carrier and the manufacturer and it could only be deployed with carrier approval. It’s unclear if it will reach those branded devices through Sprint, T-Mobile, AT&T, and Verizon, or if t will only reach the international, non-carrier branded Galaxy S devices.

The updates, however, will be a tethered update, meaning you must use the Samsung Kies software and perform the update with a PC. That means it won’t be delivered over the air.