Two days ago, we learned that Sprint was beginning to train its employees for the launch of the Samsung Conquer 4G, a mid-range phone that figured to be Sprint’s cheapest WiMax offering yet.

That detail seemed to signal that an announcement was close and sure enough, Sprint today pulled the cover back on the Conquer 4G giving it an official release and pricing to boot. Seriously, I can’t tell you how refreshing that is. I wish carriers would do that every time they announce a phone. That will be the day. 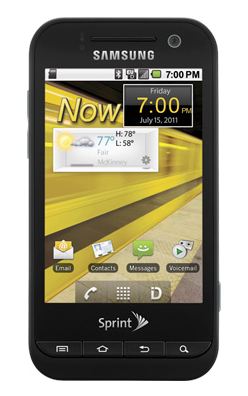 Sprint’s Conquer 4G is going to be available starting August 21st and it’s going to cost $99 on a new two year contract after a $50 rebate. That is the cheapest 4G phone in Sprint’s collection so if you want a speedy phone on the cheap, look no further than the Conquer.

Of course, most people have their eyes on the upcoming WiMax Galaxy S II device, the Samsung Epic Touch 4G, but we’re not going to judge you one way or the other. As for specs, the Conquer 4G looks like this:

Not amazing by any stretch of the imagination but it’s certainly a capable device.