After having announced that the third-generation Galaxy S III flagship Android smartphone would miss the anticipated February Mobile World Congress launch in Barcelona, Spain, there were rumors circling that the device may see a March release when Samsung France had sent out some press invitations. Now, it appears that the March date is also off the table as Samsung had confirmed with The Next Web that the phone would not debut in March. 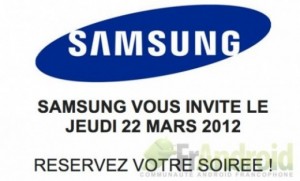 Instead, the March 22 event will just be an open house event where French media outlets can glimpse the company’s existing portfolio of products.

Since the March release, we’ve also heard of a potential April or May debut for the Galaxy S III. In the past, rumors about the device’s hardware span from a powerful dual-core CPU to a quad-core power house for the phone. Samsung only said that the device would launch in the first half of 2012 in a previous statement.

Samsung had stated in the past that the reason that it is delaying the introduction of the smartphone is to reduce the time between the device’s announcement and when the device would be available to consumers to purchase. With the Galaxy S II smartphone, it was a period of approximately half a year between announcement and when U.S. customers can purchase the phone. With the Galaxy S III phone, Samsung is hoping to introducing the phone closer to its availability date, which would help the company to deliver to customers in a timely manner, but also to not allow the competition a long lead time to catch up to its product prior to the device’s availability on the market.

The Galaxy S III smartphone is also rumored to be thinner than the Droid RAZR, which is among the slimmest smartphones on the market today.