Samsung debuted a near-minute-long Galaxy S II commercial that’s a bit on the bold and racy side, highlighting how close to life-life its large 4.3-inch Super AMOLED Plus display is, which is one of the many technological highlights of the South Korean company’s second generation flagship Android smartphone. In addition to the brilliant display, albeit at a lower WVGA resolution than many of the higher end qHD resolution LCD displays, the Galaxy S II also features a sleek, slim design and dual-core processors that will make it a power house when it comes to the U.S. 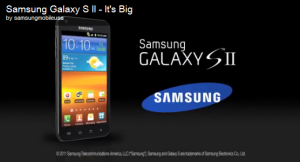 Interestingly enough, the U.S.-based commercial highlights the international version of the device, which has two capacitive touch buttons flanking a large center home button just below the display, and it’s not until the very end of the commercial that we see a possible U.S. variant of the phone with the more traditional four capacitive touchscreen buttons rather than the three buttons on the international version. The design differences between international and U.S./North American models of the phone dates back to the first generation device, which had similar design and user experience differences in the button layout. That device may be the Sprint variant, known as the Epic Touch 4G.

The video shows a racy Statue of David by Michelangelo, with the nude statue’s crotch covered by a fig leaf depicted on the display of the Galaxy S II. In another instance, a da Vinci Mona Lisa painting licking her lips where the lips and its motion are shown on the Super AMOLED Plus screen of the Galaxy S II.

The device has already landed in many other geographic locations and is coming soon to the U.S.