The Samsung Droid Charge will be able to serve as a mobile hotspot router to the most number of devices at 10, according to a leaked screenshot of the device’s training information. 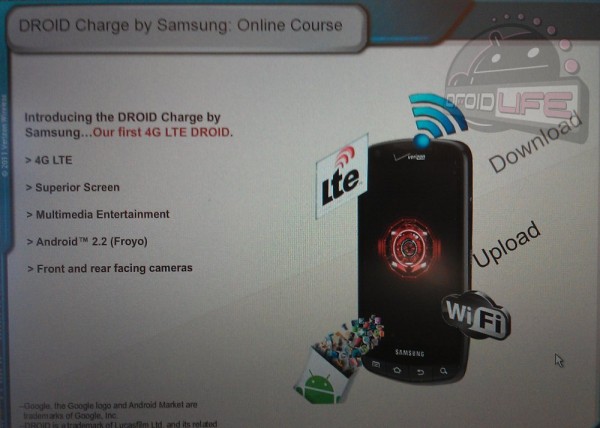 With the introduction of Android smartphones, carriers like Sprint, Verizon Wireless, and AT&T have capitalized on the ability of those devices to serve as a mobile hotspot router. Devices like the HTC EVO 4G and the HTC Thunderbolt are able to serve as a router, sharing its mobile broadband connections to up to 8 other devices over WiFi, which would provide users an alternative to WiFi hotspots and carrying around additional hardware and data plan for devices like the Sierra Overdrive, the Novatel MiFi, and USB modems.

Though mobile tethering requires additional fees, which varies from carrier to carrier, the convenience factor and benefits may outweigh the costs for enterprise users. In addition to always carrying around a phone–versus remembering to carry a MiFi unit along with you–users can also bundle their tethering data plan with their smartphone plan rather than getting a separate data plan.

With support for up to 10 devices to connect over WiFi to the Droid Charge’s 4G LTE connection on Verizon’s network, that’s the most number of devices supported via tethering on a phone, mobile router, or personal hotspot.

With Verizon’s 4G LTE connection, the carrier is promising data connection speeds of up to ten times faster than the carrier’s 3G speeds. Users have reported on other 4G devices of download speeds of around 6-12 Mbps while upload speeds hover around 2-5 Mbps.

To date, the Droid Charge has been rumored and leaked numerous times but Verizon has yet to announce official availability.