After having launched an Android-powered point-and-shoot digital camera in the form of the Galaxy Camera, which is available in the U.S. with carriers AT&T Mobility and Verizon Wireless, Samsung may be going after the prosumer and enthusiast photography market with its Galaxy Camera 2. The camera model has been making the rumor rounds recently, bearing the model of EK-GN120, which seems to be part of a different model series than the GC-100 of the current Galaxy Camera.

Part of the reason may be that the new Galaxy Camera 2 may be a more advanced mirrorless camera system that may use Google’s Android operating system underneath, like the current Galaxy Camera.

Details are scarce at this time on the specifics behind the Galaxy Camera 2, but Korea’s Digital Daily news site is reporting the mirrorless aspect. And according to Sammy Hub, the camera could potentially be announced at Samsung’s June 20th London event, which is focused on Android’s Galaxy range as well as Samsung’s Windows-based ATIV series. The device could be available for purchase as early as July 20th if all goes according to plan, according to the publication.

A mirrorless system could come with either a fixed lens, which doesn’t zoom like a smartphone camera today, or a system with interchangeable lenses, which could benefit more professional users. 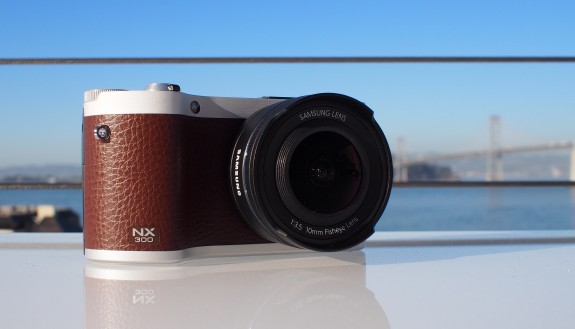 Samsung’s current mirrorless NX300 smart camera with interchangeable lenses comes with WiFi, but no Android under the hood.

Polaroid had introduced an interchangeable lens smart camera at the Consumer Electronics Show, promising a late spring launch, but so far that model has not come to fruition yet. Polaroid introduced a couple of lenses for that camera system and the company had told us that they would be making a lens adapter so users could use lenses created for the micro four thirds, or MFT, system, which would vastly expand the lens selection available.

As Samsung currently creates a mirrorless system based on a large APS-C sensor, potentially the Galaxy Camera 2 could tap into the various lens choices that are made by Samsung fo the NX mirrorless series. The NX series currently is classified as a smart camera by Samsung as it comes with NFC and WiFi for easy sharing. Adding Android to the Galaxy Camera 2 and potentially 4G LTE would expand the sharing and allow photographers to choose from the many photo and video editing apps available for the smart OS.