Just a week or so after the Samsung Epic 4G for Sprint got its update to Gingerbread and a day after the Samsung Galaxy S 4G for T-Mobile got its upgrade comes word that the Android 2.3 update for Verizon’s Samsung Fascinate is close as well as Big Red has apparently started field testing the update which is a sign that Fascinate owners should see Android 2.3.5 in the not so distant future.

The build here is EH03 and it shouldn’t be long before those of you that have rooted Fascinates will be able to get it up and running. For the rest of you, if all goes according to plan, and it’s possible that it won’t, you’ll get a taste of Gingerbread soon. 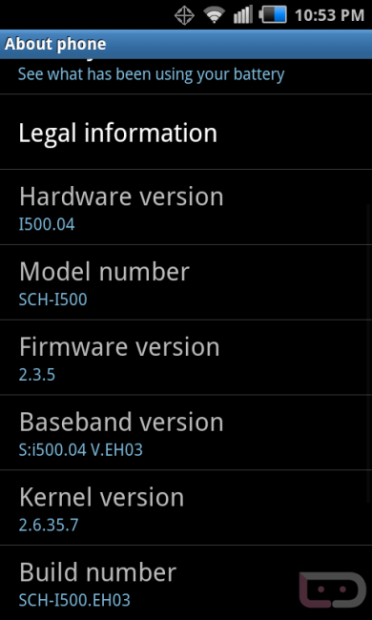 Obviously, this isn’t Android 4.0 Ice Cream Sandwich but hey, something is better than nothing.

We’ll let you know if we hear anything concrete as far as a roll out date is concerned.