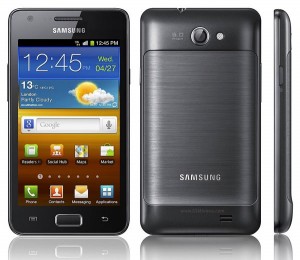 Previously rumored as the Galaxy Z, Samsung has officially announced a lower-cost high-end alternative to its Android flagship Galaxy S II smartphone known as the Galaxy R. The Galaxy R will be powered by a dual-core chip, presumably the NVIDIA Tegra 2, instead of the Galaxy S II’s dual-core Exynos CPU, and will pack in a 4.2-inch Super Clear LCD display rather than the 4.3-inch Super AMOLED Plus on the flagship. Both devices will feature 1 GB of RAM and room for expandable memory; the Galaxy R will also feature 8 GB internal memory.

The device will initially be deployed first in Europe and Samsung is hoping for a worldwide roll out later. It’s unclear if the Galaxy R will make it to the U.S.