While November saw a release for Nexus devices like the Nexus 4, Nexus 10 and Nexus 7, we also saw the update land for Google Play Edition devices and the Moto X and Moto G. Other companies like Motorola, LG and HTC have confirmed Android 4.4 KitKat updates for 2014 and several updates are thought to be close to rolling out.

One company that has remained silent is Samsung, the world’s largest Android manufacturer, and producer of devices like the Samsung Galaxy S3, Galaxy S4, Galaxy Note 3, and more. The company historically is silent when it comes to Android updates and their release dates so its silence should have come as a surprise to no one.

In recent days though, Samsung Android 4.4 KitKat update information has begun to firm up, thanks in large part to a French carrier and Samsung itself. Samsung, for the record, continues to remain silent about its Galaxy Android 4.4 update plans.

While we still don’t have all of the answers, there is still enough to warrant another look at the Samsung Galaxy Android 4.4 KitKat update situation for devices like the Galaxy Note 3, Note 2, Galaxy S3, Galaxy S4, and more.

Surprise, surprise. The Samsung Galaxy Note 3, just yesterday, became the first Galaxy smartphone to receive the Android 4.4 KitKat update. Samsung rolled the update out without warning though the roll out did come about a day after a test version of the software leaked out to Galaxy Note 3 owners. The test version wound up being the final version.

The update, as expected, was fairly small. It brought a few changes to the table including a new camera shortcut on the lock screen, album art on the lock screen and better emoji support with the keyboard. Users can also now select between Hangouts and the default messaging app. It’s an incremental change and doesn’t feature anything explosive.

For the moment, the Galaxy Note 3 Android 4.4 KitKat update is confined to devices in Poland. For those that are new to this, the update is rolling out in true Samsung fashion.

The company typically pushes the update out to one region, likely in an attempt to ensure that there aren’t major issues on board, before spreading the software to other regions around the world. Typically, we see unbranded, unlocked devices get updates first.

As for the United States, we still haven’t seen any movement. Carriers worked diligently to get their Galaxy S3, Galaxy S4 and Galaxy Note 2 Android 4.3 updates out, but it’s not clear if the United States will be among the first regions to see Android 4.4 KitKat.

Unfortunately, we still haven’t seen any movement in regard to the Galaxy Note 2 Android 4.4 update and its features and release date. That means that, for the moment, eyes should be locked in on that April time frame that was rumored many weeks ago.

One scenario that we’ve been throwing around is this. Samsung takes the stage in March, announces the Galaxy S5, and also announces Android 4.4 KitKat updates for the Galaxy Note 2 and Galaxy S3. The company has done this sort of thing before and the timing matches up.

Speaking of the Samsung Galaxy S5, rumors point to the next flagship Galaxy S smartphone having Android 4.4 KitKat right out of the box. This comes as no surprise given that Android 4.4 KitKat is starting to age and given that Samsung loves to outfit its new devices with brand new Android software. 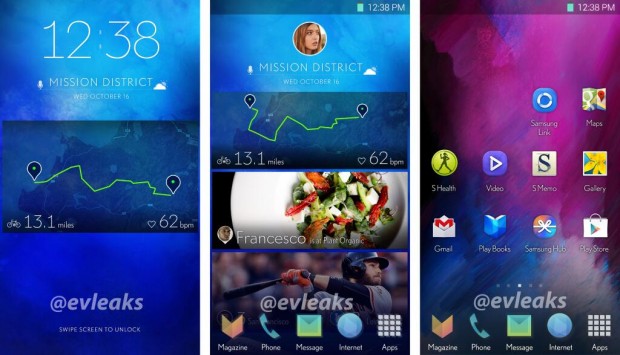 We fully expect the Galaxy S5’s version of Android 4.4 KitKat to be outfitted with a brand new version of TouchWiz, perhaps the one that we saw leak out last week with a new look.

Samsung Galaxy S4 users still haven’t heard from Samsung but we have been hearing some chatter over the last few days that points to a potential Galaxy S4 Android 4.4 update release window.

First, it was French carrier SFR that suggested an update would arrive in late January or early February. This matched an early rumor that pointed to January. Then, SamMobile claimed that the update would land in February or March. Soon after, SFR pulled the timing of those updates, only to reinstate them after we publicized the change.

So right now, it’s looking like the Galaxy S4 Android 4.4 update could land at any point between January and March. While it’s a wide window, it’s a window nonetheless.

A leak suggests that the update will be fairly incremental and won’t include the new user interface that we saw leak out during CES. So, in other words, it will probably mirror the Galaxy Note 3’s Android 4.4 update.

AT&T’s Samsung Galaxy S4 Active just received Android 4.3 Jelly Bean, months after the regular version got the update so we imagine that Android 4.4 KitKat will lag behind as well.

The Galaxy S4 mini Android 4.4 KitKat update is reportedly under consideration by Samsung. No timing has surfaced just yet but we would be shocked if the Galaxy S4 mini, a Galaxy S4 variant and a device that is not even close to a year old, doesn’t get the update. To us, it’s just a matter of when.

Like the Galaxy Note 2 update, the Galaxy S3’s Android 4.4  KitKat update release and features remain a big question mark. Last we heard, the update was going to roll out at some point in April. Samsung has yet to confirm that date which means that it’s still up in the air.

Indeed, the Galaxy S3 is teetering on the edge of software support. It’s going on two years old and Google recommends companies stop updates after 18 months. The Galaxy S3, however, is in the hands of millions and millions of people. Android 4.4 KitKat is also a small update. So, we can’t see Samsung skipping it.

The other big question is whether the Galaxy S3 will get the new UI that leaked. Our guess is no and that that will be one of the tools that Samsung uses to convince Galaxy S3 owners to drop their device and pick up the new flagship.

The Galaxy S3 mini is in the same boat as the Galaxy S4 mini. Its update is apparently up for consideration. The device isn’t as powerful as the larger Galaxy S3 but it is newer. It was released in November of 2012 as opposed to May. This is an update that is very likely right on the middle of the fence so it’s hard to lean one way or the other.

There are signs that the Galaxy S4, Galaxy S3 and Galaxy Note 2 Android 4.4 KitKat updates are on the way. There are also signs that indicate that a number of other devices are up for consideration. That lists includes the Galaxy Ace 3, Galaxy S Advance, Galaxy Ace 2, Galaxy Core, Galaxy FAME and the Galaxy Fresh.

We also expect Samsung to upgrade its Galaxy Note tablet lineup as well as the Samsung Galaxy Tab 3 line. Those updates haven’t been rumored quite yet but they are likely given their age.