Taking a page out of Apple’s book, Samsung has a released a new Samsung Galaxy Note 10.1 commercial that uses elements of quirkiness and a famous actor. In the case of the Samsung Note 10.1, it’s not Martin Scorsese or Samuel L. Jackson showing off the device’s capabilities, it’s actor James Franco.

In the commercial, Franco shows off the multitasking abilities of the new Galaxy Note 10.1 and a few of the other features as well.

In several different scenarios involving Franco and actors playing stereotypical characters, he uses the device’s S-Pen to very quickly come up with solutions for his ailing co-stars.

In one instance, he uses the S-Pen and the device’s camera to diagnose a woman’s strep throat and send the information to her doctor. In another, Franco is able to quickly get the solution to a formula that a couple of geeks are arguing over. 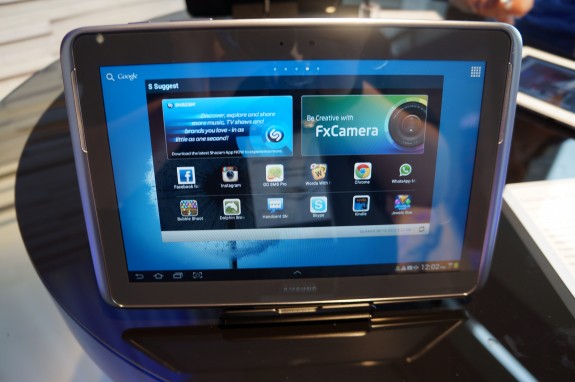 He also compliments the device’s multitasking which he says enables him to accomplish everything he needs to while still having time to imagine all of the crazy things he wants to do.

The commercial also highlights the dual-screen multitasking that is unique to the tablet and is one of the major draws of the tablet.

One place where the commercial misses is the focus on taking photos and videos with the tablet. Many tablet owners, like myself, rarely use the device’s camera. Instead of focusing on the camera, Samsung should have talked about the benefits of the quad-core processor or mentioned the high-resolution display.

The commercial also feels very much like the quirky Apple iPhone 4S commercials starring the likes of Scorsese, Jackson and John Malkovich.

It would have been nice to see Samsung do something fresh, something that differentiates itself from Apple and hopefully it decides to take a different route with the marketing for the Samsung Galaxy Note 2.

The new commercial comes just a few days after Samsung both announced and released the Samsung Galaxy Note 10.1 in the United States and elsewhere.

Samsung’s Galaxy Note 10.1 was originally announced in February at the Mobile World Congress but Samsung decided to postpone the launch to outfit it with some new features.

The new and improved Galaxy Note 10.1 features a 10.1-inch display with HD resolution, an S-Pen stylus for on-screen handwriting and note taking, a quad-core processor for fast multitasking, and Android 4.0 Ice Cream Sandwich.

Samsung has promised Android 4.1 Jelly Bean for the device later on this year.