The Samsung Galaxy Note 10.1 has gone up again for pre-order in the United States and it’s possible that it might stick around this time.

According to Liliputing, retailer J&R has begun taking pre-orders from U.S. customers for the ever-elusive Samsung Galaxy Note 10.1.

The Galaxy Tab 10.1 was originally announced back in February at the Mobile World Congress, but since then, the device has remained in the shadows. 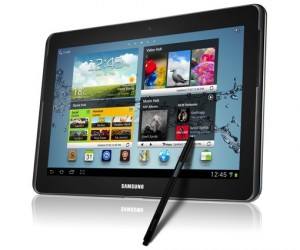 The Galaxy Note 10.1 has gone up for pre-order. Again.

Earlier this year, it appeared for pre-order at Amazon only to have Samsung issue a statement saying that the pre-order was a mistake. Since then, Samsung has remained mum on the device’s availability.

The Samsung Galaxy Note 10.1 is Samsung’s larger Galaxy Note model and its 10.1-inch display will allow users to use Samsung’s S-Pen stylus to write and draw directly on the screen.

It was originally announced with a dual-core processor, but the Galaxy Note 10.1 should be arriving with a quad-core Exynos processor. Samsung has also apparently added a nice little pen holder for the Galaxy Note’s 10.1 stylus.

Both of those enhancements are thought to be the reason why Samsung has taken so long to release the device but the company has not confirmed that detail.

In any event, it looks like a release date for the Galaxy Note 10.1 might be close assuming that J&R’s listing isn’t some sort of a mistake.