For its latest tablet Samsung decided to combine its Galaxy Tab 10.1 with the success of the Galaxy Note. The result, while promising on paper, ultimately falls flat.

Like the Samsung Galaxy Note and the upcoming Galaxy Note 2, the Galaxy Note 10.1 has a built-in S Pen. The S Pen is a stylus that uses Wacom technology for taking notes and sketching. It’s a better answer than a capacitive stylus on other tablets, but not by much.

Ultimately the stylus is not enough to save the Galaxy Note 10.1 from a low resolution screen and middling performance. 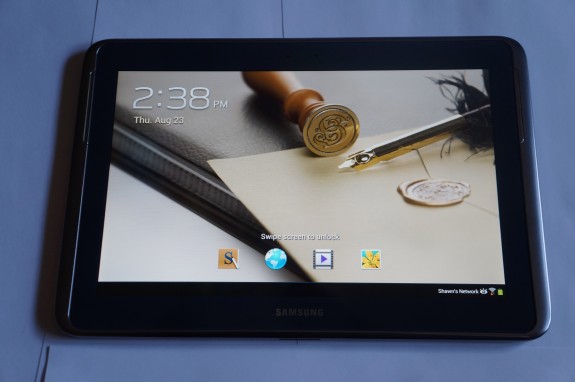 The design of the Galaxy Note 10.1 says that Samsung wanted to do everything it could to distance itself from the iPad. The front of the device has a two-tone design with a light gray plastic surrounding the black bezel, and two speakers embedded in the gray plastic.

The Galaxy Note 10.1 design is uninspired.

That light gray plastic outlines the sides of the device, and extends to encompass the back camera of the tablet. The back is just like every other recent Samsung tablet: made entirely of plastic that feels cheap and flimsy.

After tablets like the new iPad and the Asus Infinity we expect to see a great screen on any flagship tablet. Simply put, the Galaxy Note 10.1’s screen isn’t very good at all.

The screen uses a 1280×800 resolution, which gives it only a few pixels more than the Galaxy S III which has a smaller screen. 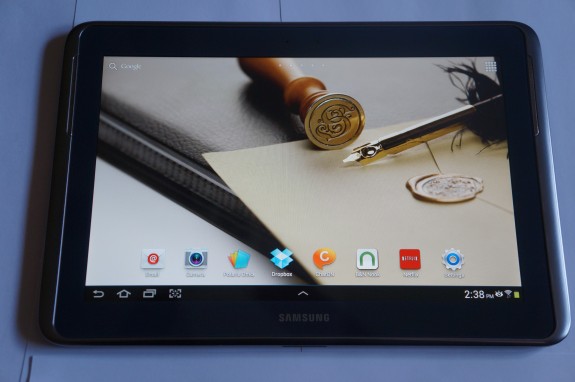 The screen isn’t terrible, the viewing angles are wide enough for two or more people to watch a video on it, but the low screen resolution is very distracting.

Samsung also needs to work on the auto brightness. I had to turn it off after only a few hours because the brightness changed so often, and was often far too heavy-handed in its changes.

The main attraction of this tablet, the S Pen stylus is hidden in the bottom right corner. The S Pen feels cheap, mostly because the Wacom technology in the tablet means the tablet handles everything, the plastic nub is the only important part of the S Pen. 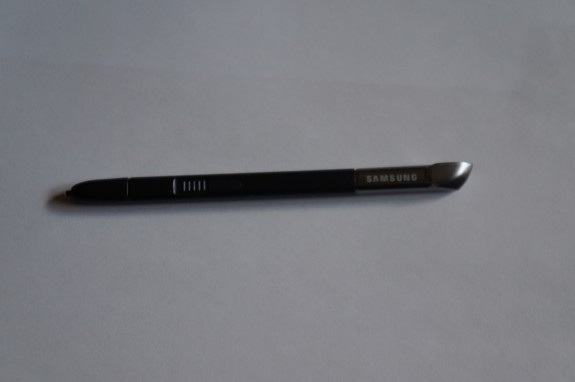 There is a button on the stylus, but it doesn’t do anything aside from make the stylus not work correctly. The button is supposed to make it easy to take screenshots, but holding the button just makes the stylus not work at all. The only function the button has that I found, is that holding the it down and double tapping the screen brings up an S Note mini app that floats on top of whatever app is running. That’s somewhat useful for quick notes, but not much else.

The S Pen has tremendous promise, and it works better than a capacitive stylus on the iPad, but it still doesn’t work that well. Samsung claims the stylus has 1024 points of pressure, but in my testing it was hard to see many variations in line thickness. That could be the fault of the apps on the device, or the tablet hardware, it’s hard to say which.

The software on the Galaxy Note 10.1 also leaves much to be desired. Starting at the top, this iteration of TouchWiz has lag when moving between home screens. That could be because the device currently runs Android 4.0 Ice Cream Sandwich and doesn’t have Project Butter from Jelly Bean, but why bother with a skin at all if it’s still going to produce lag. Samsung’s TouchWiz widgets seem to cause a lot of this lag. Any screen with a TouchWiz widget is slow to move into or out of view, while other widgets like the large Nook widget that Samsung pre-installs on one home screen produces much less lag. 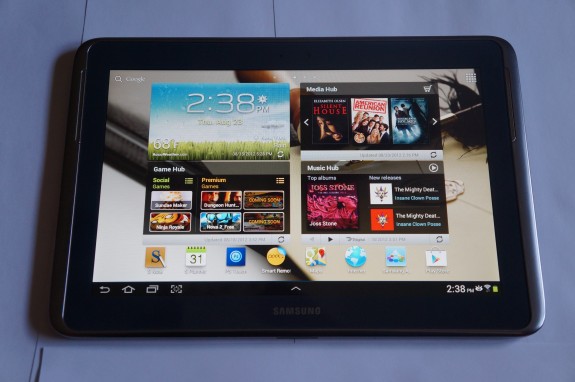 The Galaxy Note 10.1 ships with a collection of S Pen apps.

The lag in multiscreen might be acceptable if any app worked with the feature, but Samsung only used its own apps in the feature. It’s sad because the best use I can think of for the mode is running Netflix next to a Twitter client, but the Galaxy Note 10.1 doesn’t support that feature. I doubt Samsung will open the mode to other developers, or that other developers would even care to take advantage of it. 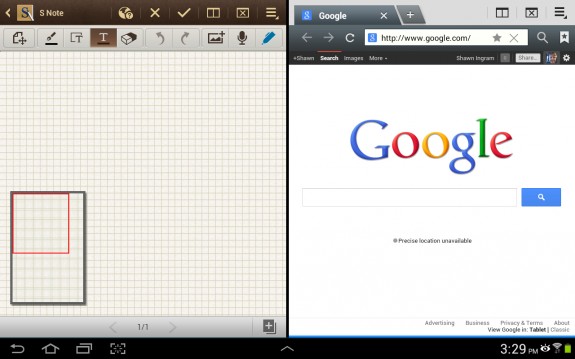 The big software draw, the multiscreen apps aren’t much better. Only a few Samsung apps can run in multiscreen mode, and they don’t even run well. While the apps are technically side-by-side on the screen at the same time, only one is active at a time. Tapping the other app switches focus, but that switch takes a few seconds. During those few seconds the app still reads every input. That means any notes written in S Note in those first few moments don’t appear at first, so I had to make sure I was extra careful with my handwriting. That also means the browser might scroll far past the point I wanted, often scrolling all the way down to the bottom of the page.

Other software complaints include all the annoying sounds TouchWiz makes everything anything happens, the inability to put actual apps in the mini dock in the status bar, and the inability to change the apps in the dock that appears when the S Pen is removed from its slot.

There is some good news for the software, however. On the top of the device Samsung included an IR sensor which works with the include Peel remote app. With the app users can control their HDTV and cable box with the Note 10.1 I tested it with a Vizio and Samsung TV, and it worked well with both. The app works as a remote and a TV guide. It’s just a shame the best and most interesting app pre-installed on the device doesn’t even come from Samsung.

If there is one great thing in the Samsung Galaxy Note 10.1 its the battery inside it. In my testing I was unable to run the battery down to nothing. The first night it dropped from 35 percent to zero, but after that I could spend a few hours browsing the web, reading Twitter in Plume, playing Temple Run, and reading books in the Kindle app without fear of the battery dying.

The Samsung Galaxy Note 10.1 has a rear-facing 5MP camera and a front-facing 1.9MP camera. Neither can take very good photos, and should only be used for video chat. 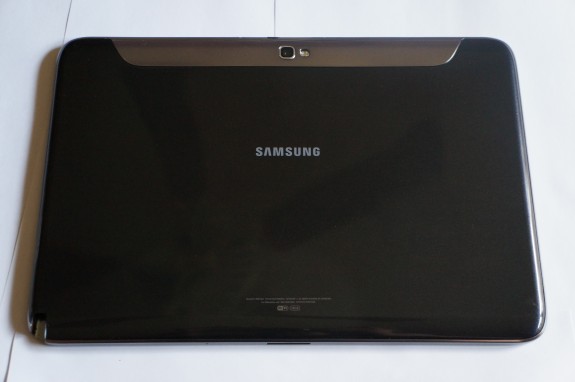 Don’t plan on taking many photos with the Galaxy Note 10.1.

After all, who really wants to hold a giant widescreen tablet in front of their face to take a photo when they can use an actual camera or a smartphone?

Is the Samsung Galaxy Note 10.1 Worth It? 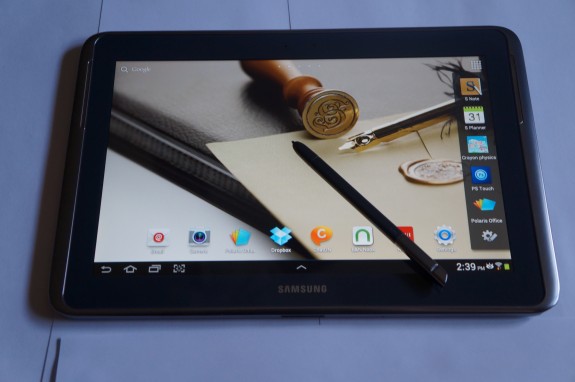 Overall, I see no reason to purchase the Samsung Galaxy Note 10.1 over an iPad, or any other Android tablet. The stylus is an interesting idea, but the execution just isn’t very good.

I wanted to like the Note 10.1, but after I had it in my hands, it was hard to find a reason to use it instead of my iPad, or even the iPhone or Galaxy S III. When a user would rather use a smartphone instead of the tablet, that’s not a good sign. 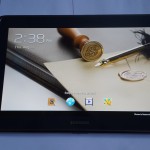 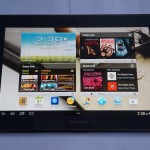 The Galaxy Note 10.1 ships with a collection of S Pen apps. 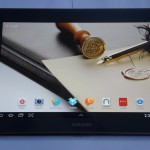 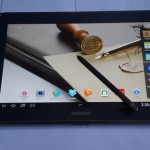 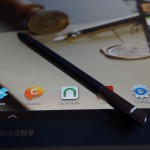 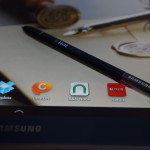 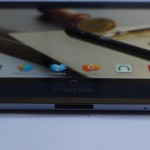 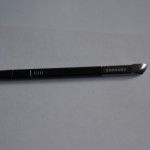 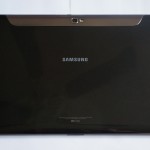 Don’t plan on taking many photos with the Galaxy Note 10.1. 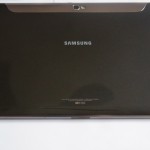 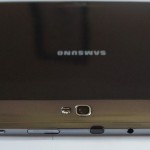 The Galaxy Note 10.1 design is uninspired.