Earlier this month, Samsung announced that it would be bringing a new color option to the table for those looking to snag the Samsung Galaxy Note 2. Already, the company offers four color variants for the Galaxy Note 2 phablet making this new color the fifth overall option for those who may be tempted to buy the device. 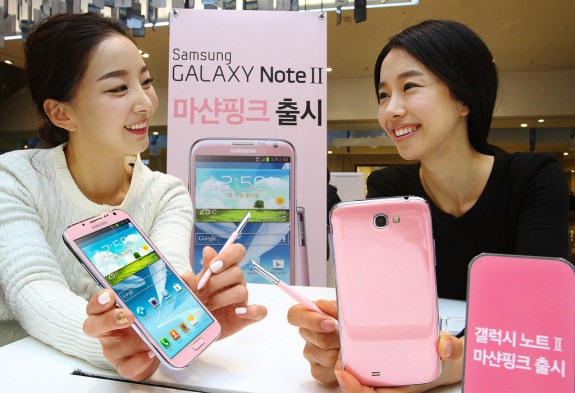 The pink Galaxy Note 2 is now on sale.

The new color is the same pink shade that we saw leak out prior to Valentine’s Day on Samsung’s Taiwanese website. Samsung calls the new color Martian Pink and it translates into a diamond pink hue encompassing the entire Galaxy Note 2. The device is out today for three carriers in Korea and it joins the other color options which include Marble White, Titanium Gray, Amber Brown, and Ruby Wine.

Samsung has not yet announced whether or not it will move to markets beyond Korea though we expect that it will, given that it made an appearance on the company’s site in Taiwan. Those who are hoping for the color in countries outside of Asia may be let down as there don’t appear to be any plans to release this color in regions like the United Kingdom and the United States.

We have seen Samsung release several new Galaxy S3 colors in the U.S. but that device is far more popular than the Galaxy Note 2. We haven’t seen the other colors arrive in the U.S. as of yet so it could be that consumers here never see them.

Those who are able to purchase this new pink Galaxy Note 2 will encounter the same Galaxy Note 2 that arrived in the latter part of last year.

That means that it features a 5.5-inch HD display, quad-core processor, 8MP camera, Android 4.1 Jelly Bean, and of course, the device’s unique S-Pen stylus that takes advantage of a number of applications including S-Note.