Brief Mobile has unearthed a screenshot that seems to depict a device with the model number SCH-I605 which appears to be a handset running Android 4.1.1 Jelly Bean. The report backs up the screenshot with a listing from a handset detection archive and a couple of Flickr pages where photos were uploaded using this smartphone.

So, it appears that the SCH-I605 is real, it’s just unclear as this point if it truly is the Verizon Galaxy Note 2. 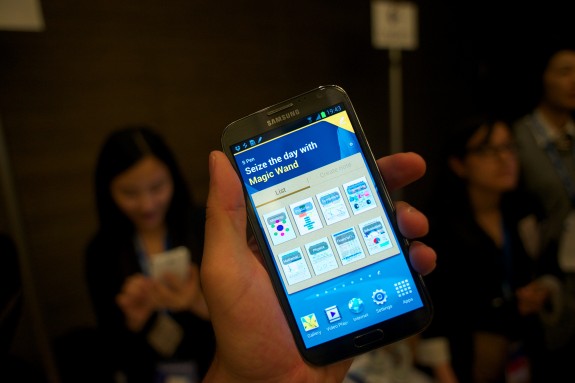 The Galaxy Note 2 could launch on Verizon.

What’s interesting is that Verizon has already released the 5-inch LG Inspiration which comes with a stylus and it also rumored to be releasing a 5-inch HTC smartphone that may or may not come with a stylus as well. Many wondered whether Verizon would release another phablet device into this crowed lineup but it appears that it may.

It appears that Verizon’s Galaxy S II will feature a quad-core processor and 4G LTE data speeds, a combination that has not yet arrived in the United States and possibly one of the reasons why the Galaxy Note 2 doesn’t have an official release date yet.

The original Galaxy Note was released on AT&T and T-Mobile only with Sprint and Verizon watching on the sidelines. However, it looks like the success that AT&T had with the device has convinced several other carriers to join the party.

AT&T, Sprint, T-Mobile and according to this report, U.S. Cellular will get the Galaxy Note 2 along with Verizon. All five of those carriers also carry Samsung’s flagship smartphone, the Samsung Galaxy S III.

Thus far, Samsung has not confirmed the device for any U.S. carriers and it has not yet given it a release date. The company says that it will be released later this year.

Other regions like Europe, the Middle East, and Asia will see the device launch in October.

The Samsung Galaxy Note 2 is set to replace the original Galaxy Note phablet when it arrives in October. It features a 5.5-inch HD display, quad-core processor, new S-Pen stylus, and Android 4.1 Jelly Bean amongst other features.