Earlier today, Samsung made the Samsung Galaxy Note 2 official for AT&T, Sprint, T-Mobile, Verizon and U.S. Cellular and while many of the details remain unknown, we do know that the device will likely arrive on these carriers in late October for $299.99.

U.S. Cellular confirmed earlier today that its device would be hitting shelves at some point in October for $299.99 on-contract. The carrier has even begun taking pre-orders for the device ahead of its release date.

AT&T, Sprint, T-Mobile and Verizon did not confirm any specifics as far as the Galaxy Note 2 is concerned but we don’t see them completely undercutting U.S. Cellular in terms of price, they didn’t do that with the Galaxy S III. After all, they will all be launching similar Galaxy Note 2’s.

We also don’t see them launching the Galaxy Note 2 too long after the regional carrier, if at all, so it’s safe to assume that all four of them will launch the Galaxy Note 2 around the same time for $299.99 on contract. 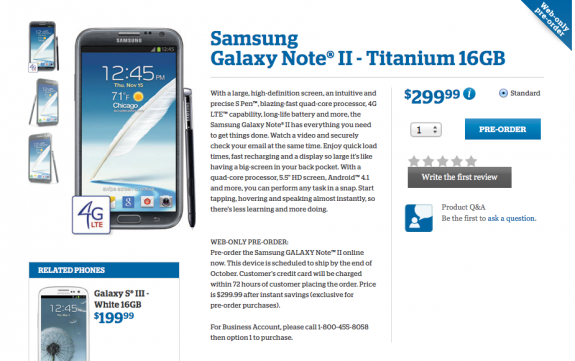 That of course is the same price that the original Galaxy Note launched for on AT&T earlier this year.

Unfortunately, that price may be a little steep for some of those that were looking to get their hands on Samsung’s new 4G LTE, quad-core powered 5.5-inch phablet. And with devices like the iPhone 5 checking in with cheaper price tags, many could pass on the Note 2 if it’s this expensive across the board.

Fortunately, at least prospective Galaxy Note 2 buyers will have options as the five largest U.S. service providers will be carrying the Galaxy Note 2 in the future.

That’s quite an upgrade over the original Galaxy Note which was only available on AT&T at the start and quickly fizzled at T-Mobile.