We still don’t know when T-Mobile plans to release the Samsung Galaxy Note 2 but it could be soon as the carrier has posted the device to its website, saying that it will be hitting virtual shelves soon.

T-Mobile posted the Samsung Galaxy Note 2 to its website, a step that it usually takes before it releases a device to the public. The Galaxy Note 2 is listed as “Coming Soon” on the website but no details about its release date are revealed.

The website does not let interested parties place a pre-order and the carrier says that pricing is still not available, even as we quickly approach the Galaxy Note 2 U.S. launch date which is set for October 24th in New York City. 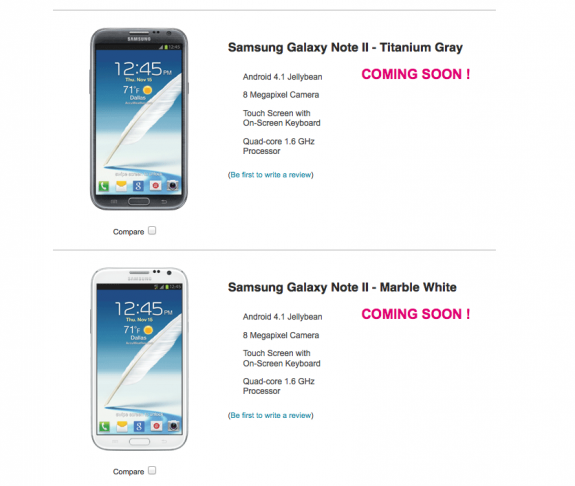 The Galaxy Note 2 is coming soon to T-Mobile.

Sprint and U.S. Cellular are going to offer the Galaxy Note 2 for $299.99 on-contract, the same price that the original Galaxy Note launched for when it arrived on AT&T earlier this year.

AT&T, T-Mobile and Verizon have all yet to release any concrete details about their Galaxy Note 2 release dates or pricing and it could be that they are waiting until October 24th to make an announcement.

The listing on T-Mobile’s website bodes well for a release in the near future and we’ve seen October 24th thrown out as a “launch date” which could also translate into release date. At this point we aren’t sure. Because Sprint is releasing the phone one day after the launch, it’s entirely possible that T-Mobile will follow suit.

Thanks, everyone who sent this in!