The advertisement, first discovered by Blog of Mobile and courtesy of UnwiredView, depicts the Samsung Galaxy Note 2 in two colors, colors that oddly enough, Samsung has not announced yet for the popular 5.5-inch phablet device. The ad shows off what appears to be a red Galaxy Note 2 as well as brown Galaxy Note 2. Those both come in addition to the black Galaxy Note 2 that was depicted last month but is believed to be fake. 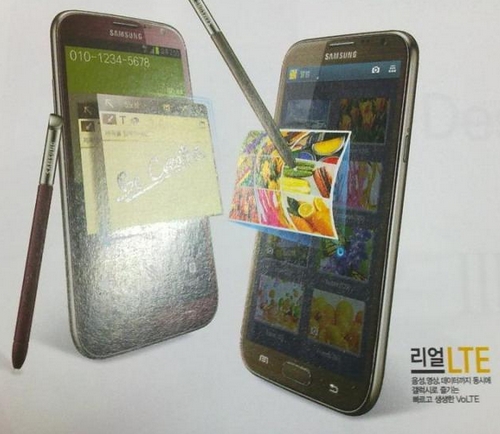 The Galaxy Note 2 will apparently come in two new colors at some point.

These two colors though appear to be legitimate and could be launched in the coming year, possibly at Mobile World Congress 2013 where Samsung is expected to once again have a presence, and quite possibly announce the Samsung Galaxy S4, its 2013 flagship smartphone.

Samsung has yet to confirm the colors for the Galaxy Note 2 but if the company does indeed release new colors, it would not be surprising. With the Galaxy S3, it originally offered two colors and then released a number of different color variants in the months after its launch. The same could definitely happen for the Galaxy Note 2, a device that has already sold five million units worldwide with at least one million of those coming in Korea alone.

If the company follows the same path as the Galaxy S3, expect there to be more colors than just the two seen here in the advertisement. However, it’s unclear just where Samsung might release the new models. Given that this is a Korean ad, it’s likely that they will, at the very least, arrive in Korea at some point. With the Galaxy S3 though, Samsung brought new colors around the world so it wouldn’t be surprising to see new color options join the Galaxy Note 2 models already available on AT&T, Sprint, T-Mobile, Verizon and U.S. Cellular.

The Samsung Galaxy Note 2 is Samsung’s massive 5.5-inch phablet that comes with an HD display, quad-core processor, and Android 4.1 Jelly Bean right out of the box. And despite its size and price, the device has proved to be a hot commodity with shoppers all over the world.