Just a few days after launching in a new Martian Pink shade, the Samsung Galaxy Note 2 has appeared in what looks like another new color today as Samsung’s website has revealed what appears to be a Topaz Blue color for Samsung’s popular phablet device.

In late February, Samsung launched a pink version of the Samsung Galaxy Note 2 in Korea, the third color that the Galaxy Note 2 has seen added since it launched in white and gray last year. The Galaxy Note 2, is as of right now, available in five different colors including Martian Pink, Marble White, Titanium Gray, Amber Brown, and Ruby Wine. 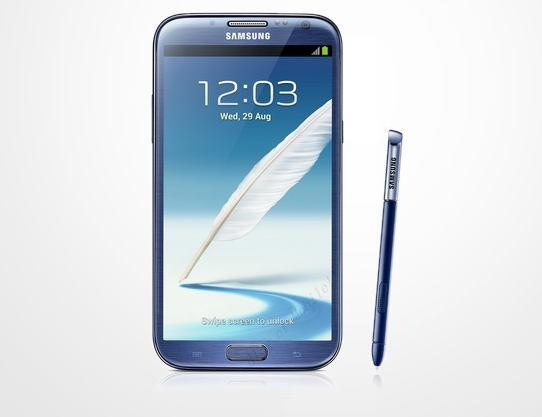 However, thanks to an appearance on Samsung India’s website, first noticed by Blog of Mobile, the Galaxy Note 2 could be coming in a new shade in the future. The listing, which has since disappeared, showcased a device sporting a color that Samsung is calling Topaz Blue. While Samsung launched the Galaxy S3 in Pebble Blue,  it would be the first blue color for the Galaxy Note 2.

It appears that the color might only be heading to India and Germany at the start though it’s possible that the color could become available elsewhere in the future. Samsung has not confirmed anything just yet and given that the listing was pulled, it may take a few days, weeks or even months before the new color arrives. That is, if it is indeed the real deal.

Those hoping for a new color in the United States have, so far, not been treated to one. While the Galaxy Note 2 looks like it will be adding its fourth color since launch, those in the U.S. have only had access to the white and gray models, at least when buying on-contract.

These Galaxy Note 2 models of course boast the same hardware and software as previous versions of the Galaxy Note 2. That means that they feature a 5.5-inch HD display, quad-core processor, 8MP camera, Android 4.1 Jelly Bean, and of course, the device’s unique S-Pen stylus that takes advantage of a number of applications including S-Note.