Earlier this year, we saw Samsung shift from blue and white to black and white for the Samsung Galaxy S4, a move that mirrored Apple’s offerings. Apple appears poised to deliver a gold iPhone 5S alongside the white and black models and it looks like Samsung will be drawing a page out of the iPhone 5S’ book. Sort of.

The Galaxy S4 came in black and white and it seems the Galaxy Note 3 will as well.

SamMobile claims that the Galaxy Note 3 will be initially offered in two colors, white and black, and that those colors will be the options available to consumers shortly after launch. The device is expected to go on sale almost immediately after its September 4th launch event. In addition, it looks like Samsung may release a pink Galaxy Note 3 just about a month after the device begins shipping putting a release date somewhere in October.

It’s not clear where the pink Galaxy Note 3 will be headed but we’ve seen Samsung’s other pink devices emerge for select markets around the world. Carriers in the United States have not been keen on offering the color so the odds of a release are slim. 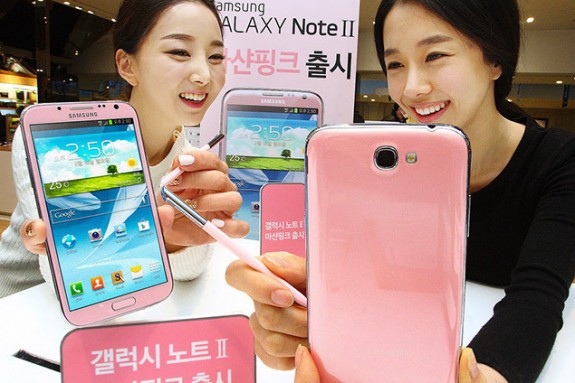 The Galaxy S4 and Galaxy Note 2 both arrived in pink.

The Samsung Galaxy Note 3 is expected to debut on September 4th ahead of IFA 2013 with a release date pegged for September as well. The device is thought to have a 5.7-inch 1080p display, quad-core processor, 13MP camera, Android 4.3 Jelly Bean and more to help it compete with the likes of the iPhone 5S which is also expected to debut in early September.