Last week, Samsung promised that it would deliver a new Exynos 5 Octa processor sometime this week and just a short time ago, the company made good on that promise debuting the latest generation Exynos 5420 processor, a processor that will enter production in August could very well end up inside of the new Samsung Galaxy Note 3 which is rumored for September.

It’s clear that the Samsung Galaxy Note 3 will be coming later this year as numerous rumors and leaks have pointed to a next-generation phablet arrival in September around the start of IFA 2013 in Berlin, Germany. While it’s still unconfirmed, Galaxy Note 3 rumors have been swirling, indicating that the device may feature a larger and better display, improved processor, enhanced camera, and a slimmer profile.

A Samsung Galaxy Note 3 processor may have just been revealed.

Specifically, the device is heavily rumored to feature a 5.7-inch display, 13MP camera that could potentially come with optical zoom, and a design that could resemble the Samsung Galaxy S4 and drop the Galaxy Note 3 down to 8mm. The device is also rumored to possess a powerful processor, though it appears that Samsung might be taking a two-pronged approach with its Galaxy Note 3. 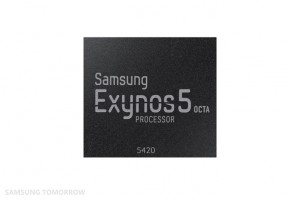 Samsung’s new Exynos 5 Octa processor offers enhanced performance over the last-generation CPU. It features 3D graphic processing that is two times greater than that of the original Exynos 5 Octa. More importantly, the CPU features support for OpenGL ES 3.0 and Full Profile Open CL 1.1 which the company says “enables the horsepower needed in multi-layer rendering of high-end, complex gaming scenarios, post-processing and sharing of photos and video, as well as general high-function multi-tasking operations.”

Gaming, photography and video and multitasking are three of the main components of a big screen smartphone like the Samsung Galaxy Note series, particularly with a variant that is said to be coming with a much-improved camera.

September 4th and September 6th have been mentioned as possible launch dates though Samsung remains mum on specific timing. However, Samsung says that this chip will enter mass production in August which conveniently puts production just a month ahead of the presumed Galaxy Note 3 launch and release.

While it doesn’t confirm a Galaxy Note 3 for September, it makes a launch extremely likely.