Samsung Galaxy Note 3 Said to Be in the Wild, Again

Another day, another leaked photo proclaiming itself to be evidence of the Samsung Galaxy Note 3 in the wild well ahead of its  rumored launch date at IFA 2013 in Berlin in September.

The Samsung Galaxy Note 3 has been rumored for months though consumers shouldn’t expect it to arrive for several months as Samsung typically launches its Galaxy Note variants at the IFA trade show in Berlin. Thus far, all signs point to the rumored 5.9-inch Galaxy Note 3 touching down at some point in September.

Galaxy Note 3 specs have leaked out, pointing to a larger, 13MP equipped, Galaxy S4 inspired Galaxy Note variant. And while those specifications are likely close to the real deal, photos of the Galaxy Note 3 that have emerged recently likely don’t show off the device itself. Already, we’ve seen several photos proclaiming themselves to be the Galaxy Note 3 and today, we’re seeing yet another photo, this time out of China. 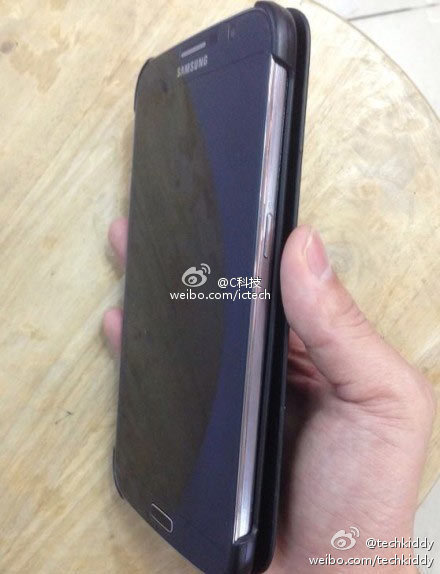 This is alleged to be the Samsung Galaxy Note 3.

TechKiddy unearthed an image of a device it is claiming could be the Samsung Galaxy Note 3. The image shows a device that is said to be a Galaxy Note 3 prototype that showcases a device that evidently has a 5.9-inch display and certainly has rounded corners. It also appears to have a metal band around the sides though it could be faux-metal like the material around the Galaxy S4.

Again, as with all of the other leaked photos, this should be taken with an extreme grain of salt. Samsung may not have a tight lid on the specifications of its rumored products but when it comes to the actual designs, those typically don’t emerge until just before an announcement. So anything leaking out right now, this far in advance, likely is something that was scrapped in testing, is in a shell to protect its identity, or is fake. It’s impossible to say what this latest image is.

What it’s likely not though is the Samsung Galaxy Note 3  in the wild, as it likely won’t emerge until August if Samsung is indeed planning to launch the new phablet in September in Germany.