The Samsung Galaxy Note 3 release date continues to inch closer with the device starting to pass carrier certifications ahead of its September 4th launch date and ahead of its eventual arrival later this year.

While Samsung still hasn’t confirmed what it will be launching at its September 4th launch event, it’s clear that it will be the Galaxy Note 3 that is announced. Samsung saves Unpacked events for its biggest device launches and the invitation dropped more than a few hints about exactly what would be on display ahead of IFA 2013.

Read: Galaxy Note 3 vs. Galaxy S4: What Buyers Can Expect from Samsung.

The Samsung Galaxy Note 3 is expected to join the Galaxy S4 soon.

The Samsung Galaxy Note 3, model number SGH-N075 has been spotted passing a Bluetooth certification for Japanese carrier NTT DoCoMo. The filing, first noticed by RBMen, points to a Galaxy Note 3 release date getting close as these certifications are some of the final steps towards a release. While this doesn’t necessarily mean something is imminent, it does bode well for an earlier release than last year. 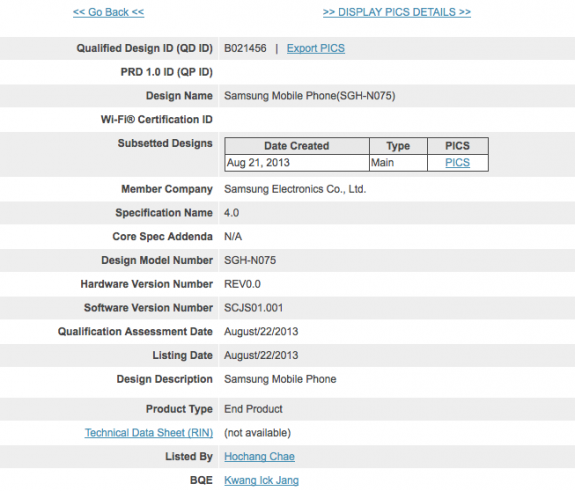 The Galaxy Note 3 for Japanese carrier NTT DoCoMo has passed through a Bluetooth certification it seems.

Last year, DoCoMo released its Galaxy Note 2 in November, just like some carriers in the United States. The fact that we’re seeing a certification this early could mean that the carrier is prepping for much more tolerable release date. Whether this applies to the United States or not remains to be seen. Whatever the case, the Galaxy Note 3 release is progressing as we get closer to the September 4th launch date.

Samsung’s Galaxy Note 3 is expected to land on a number of carriers in the United States and elsewhere when it arrives. And when it does, the device is thought to have a 5.7-inch 1080p display, 13MP camera, 3GB of RAM, Qualcomm Snapdragon 800 processor or Exynos 5 Octa, Android 4.3 and more.

The device will have big shoes to fill as the Galaxy Note 2 is widely considered to be one of the best Android smartphones on the market with its powerful software and capable hardware.