Samsung is preparing to announce the Galaxy S5 at an event later this month and despite initial rumors that the smartphone would come with a waterproof and dustproof feature it looks like this will not make it on the flagship model that arrives in April or May, but in a Galaxy S5 active model that comes later.

While the Samsung Galaxy S5 may not see this feature, it could make an appearance on the Galaxy Note 4 that is rumored for later this year. 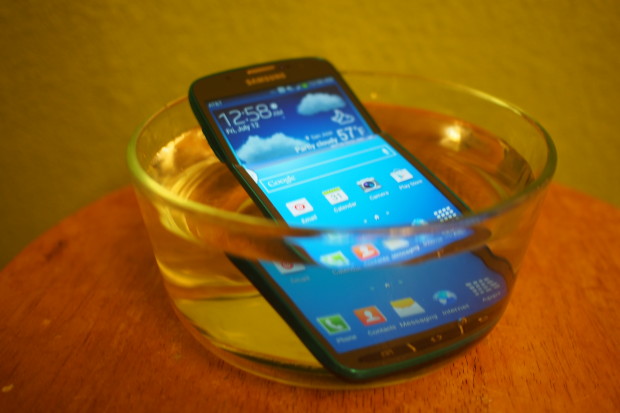 Samsung could be planning a waterproof Galaxy Note 4 as this feature may not make the cut for the Galaxy S5.

A new report today suggest Samsung is switching technologies to make it easier to deliver a flagship smartphone that is waterproof. According to Korean publication Etnews Samsung is making moves that suggest the company plans to make a Galaxy S5 model with waterproof and dustproof features in greater supply, but the wording and a previous report suggests this is not the main Galaxy S5 model. The report claims Samsung cancelled an order for antenna technology that the company used on the Galaxy Note 3 to focus on different type of technology that is easier and more suited for a waterproof smartphone.

According to Etnews Samsung will make waterproof and dustproof essential functions on all flagship models. Samsung is allegedly working with suppliers that are developing better antenna technology to enable a thinner waterproof smartphone. Daesan Electronics is working on a design that can shrink the back plastic case of a waterproof smartphone by as much as 20%. Thickness is a major hurdle for Samsung to jump in order to deliver a waterproof flagship smartphone.

The Galaxy S4 Active is thicker than the Galaxy S4 and while case sales and S4 active sales suggest many consumers would love a waterproof phone, selling a thicker phone is a challenge even with the added benefits.

If this technology comes along fast enough, and the prediction that Samsung wants waterproof to be a standard feature is true, we could see a Samsung Galaxy Note 4 with a waterproof and dustproof design later this year.

The prospect of a waterproof Galaxy Note 4 is exciting, but it is important to consider the back and forth nature of rumors and even executive comments as a Galaxy Note 4 release approaches reality will meet rumors and some features that look good on a concept will not stand up to the needs of mass production.

A waterproof Galaxy Note 4 is far from confirmed, but Samsung’s Galaxy S5 announcement on February 24th could shed light on what we can expect from the Galaxy Note 4 later this year and additional rumors will help shed light on the larger Galaxy Device.

Samsung executives are likely excited about packing new technology into the Galaxy Note 4 which is likely to deliver a 5.5-inch or larger display in order to compete with a rumored 5.5-inch iPhone 6 this fall.