As we head deeper into the new year, those in the hunt for a new device are going to be bombarded by rumors regarding upcoming smartphones. One of those devices will be the Samsung Galaxy Note 4, Samsung’s all but confirmed Galaxy Note 3 successor that is expected to debut later on this year.

When the first Samsung Galaxy Note hit shelves back in 2011, it was considered a niche device, one that was aimed at a crowd that wanted a massive smartphone display and a stylus. In other words, a device that blends the features of a tablet and a smartphone. As we learned, the Galaxy Note was, and is, much more than a niche device. It’s one of the best smartphone lines on the market.

Samsung Galaxy Note 4 rumors have been rampant thanks to several reports and thanks to Samsung itself. It hasn’t been shy about its upcoming flagship.

With rumors emerging on a weekly basis, those who are in the market for a new device or are thinking about replacing their current device with something new, are starting to weigh their options. And it’s our job to make sure that those people are prepared as we get closer to launch later this year.

We realize that the Galaxy Note 4 exists only in rumor at this point but there are enough credible pieces of information to warrant early comparisons to top devices like the iPhone 5s. The goal of this comparison is to help set the expectations for current iPhone 5s who might be thinking about making a change. It will also help prospective iPhone 5s buyers put things into perspective as they prepare to buy.

The iPhone 5s comes with one of the best designs on the market. It’s a premium, industrial design that offers users a great look, durability and a slim form factor that not only fits snugly inside of a jean pocket but is easy to use with one hand. 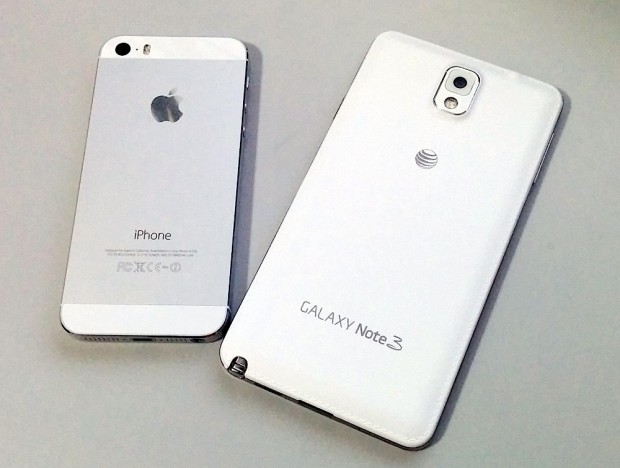 The first thing that buyers need to know is that the Galaxy Note 4 will almost certainly come with a much larger footprint, that is to say that it will come with a larger form factor. The Samsung Galaxy Note is one of the largest smartphones on the market and unless Samsung does something drastic, the Galaxy Note 4 should be large as well. We don’t need rumors to tell us this.

One report claims that the Galaxy Note 4 will come with an IP67 certification, just like the Galaxy S5. What this means is that it will be dust and water resistant, something that the iPhone 5s can only obtain through the use of a case.

We’ve also heard rumors, which have been fueled by a pair of patent filings, that this new form factor could be dominated by a brand new three-sided display, something that the iPhone 5s does not have.

Back in 2012, DisplayMate claimed that the iPhone 5s’ display was the best smartphone display on the planet. This year, the well-respected publication performed a series of tests and determined that the Samsung Galaxy S5’s display is actually better than the Retina Display found on Apple’s iPhone. So why is this important? 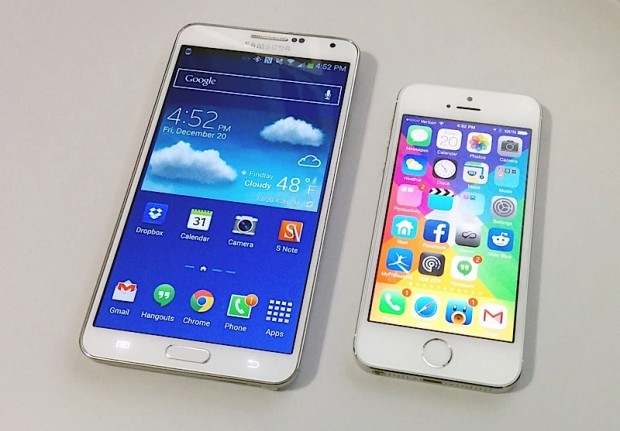 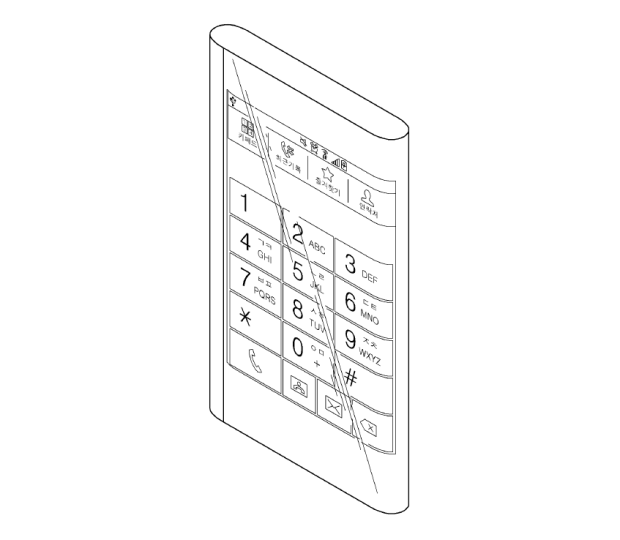 This may or may not show Samsung’s plans for the Galaxy Note 4.

So we know a QHD display and or a bent display are both possibilities. Whether those are worth waiting for will be an extremely personal decision. One thing to keep in mind is that the Galaxy Note 4 display is almost certainly going to be larger than the iPhone 5s. In fact, the Galaxy Note display has progressively gotten larger, year after year.

What started as a 5.3-inch display has transitioned into a 5.7-inch monstrosity. Given that this is one of the Galaxy Note’s unique properties, we simply can’t see Samsung shrinking it by much. If anything, it could make it bigger to give it some distance from the 5.1-inch Galaxy S5. Those debating between waiting for the Galaxy Note 4 or buying the iPhone 5s before its arrival will want to keep that in mind.

The iPhone 5s is a high-powered smartphone. It comes with a 64-bit A7 processor, one of the best cameras on the market, and three storage options that allow consumers to pick and choose. It also comes with Touch ID, the fingerprint sensor embedded inside of the home button for added security and convenience.

Samsung’s Galaxy Note is a device that is geared towards gamers, multitaskers and those that consume a ton of content. And thus, Samsung always equips its Galaxy Note models with a ton of firepower. We called last year’s Galaxy Note 3 Samsung’s most powerful smartphone. And up until the arrival of the Galaxy S5, it was. 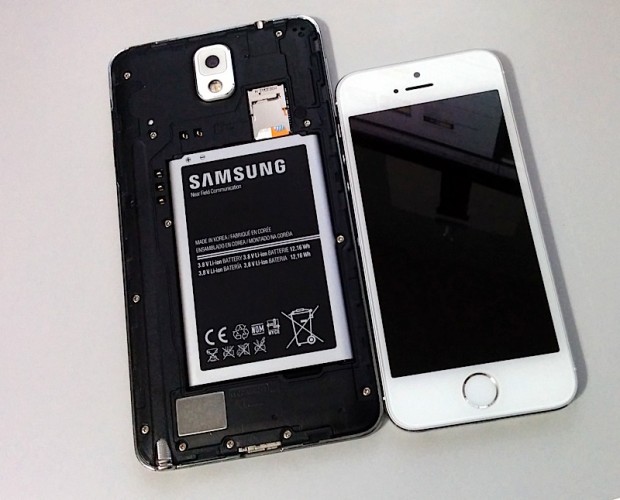 The Galaxy Note 3 battery is almost as big as the iPhone 5s.

Galaxy Note 4 rumors point to more of the same from Samsung. Specs are said to possibly include a faster processor and LTE-Advanced for faster data speeds. LTE-A offers faster data speeds for compatible devices but it also requires networks to offer the capability. U.S. carriers have been slow to adopt the new technology though Verizon plans to deploy LTE-A by the middle of 2014. 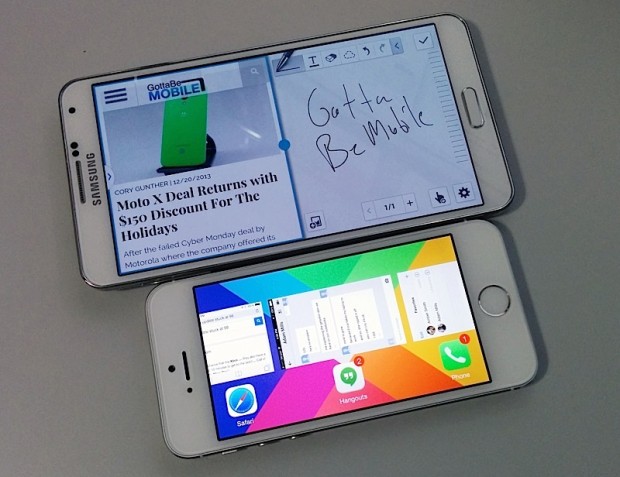 An early Galaxy Note 4 rumor suggested that the device could come equipped with a fingerprint reader and now that the Galaxy S5 sports one embedded in its home button, there is a good chance that it will match the iPhone 5s’ Touch ID sensor.

This is an area where the two device will be significantly different. We don’t even need an avalanche of rumors to confirm this ahead of launch. While the iPhone 5s uses Apple’s iOS 7 operating system, the Samsung Galaxy Note 4 will use some version of Android combined with Samsung’s TouchWiz user interface.

Both pieces of software offer distinct advantages and disadvantages and consumers trying to decide between these two devices would be wise to go hands-on with both before making a final decision. Software is a very personal experience and consumers will need to decide which one feels more comfortable.

The Galaxy Note series is well know for its larger screen but it’s also known for the S Pen stylus that Samsung bundles along with it. The S Pen is not a typical stylus. It allows users to write and draw on the display but it also can take advantage of a number of powerful applications including S Note, a powerful note taking app. Those who are unfamiliar can get acquainted in the video below.

We don’t know yet how the S Pen software will look on the Galaxy Note 4 but we do know that Samsung always makes improvements to the software year after year.

Ah yes, the release date. Those who are trying to decide whether to buy the iPhone 5s now or wait on the Samsung Galaxy Note 4 aren’t going to like the sound of this.

In recent months, Samsung has all but confirmed the Galaxy Note 4 release for the second half of the year and more specifically, in the fall. The company historically has used the IFA conference to launch its Galaxy Note and rumors suggest that it’s at least considering the event for the Galaxy Note 4 launch.

Not only does this mean that buyers are likely going to have to wait several months to physically compare the two, it means that the Galaxy Note 4 launch could clash with the arrival of the iPhone 6, Apple’s rumored iPhone 5s successor.

IFA 2014 kicks off on September 5th and prospective buyers will want to circle that date in pencil. That could be when we learn about the Galaxy Note 4 but it probably won’t be the day that the device hits shelves. Samsung usually waits three to four weeks to release a device which means that we’re currently looking at a launch in September and a release in September or October, dates unknown.

While the Samsung Galaxy Note 4 exists in rumor, some of its features are predictable. It will likely be much larger than the iPhone 5s, it will likely come with a larger display, it should feature an S Pen, and it probably won’t arrive until the fall. Oh, and it should command a higher price tag than the iPhone 5s. Samsung’s Galaxy Note models are well known for their $299.99 on-contract price.

If you watch movies or TV on your phone, or even prefer your phone to owning a tablet, the Note 3 display is a big bonus.

There are plenty of reasons to think about waiting for the Galaxy Note 4, the potential for a three-sided display being one of those reasons. However, if an expensive price, massive screen and a stylus don’t sound appealing, it might be worth taking a long hard look at the iPhone 5s.

Unlike the Samsung Galaxy Note 4, the iPhone 5s can be found in stores.