Tablets are only usually viewed as devices for games and reading, but in the enterprise, tablets can be used for real work. When I spoke to Oliver Bussman, CIO of SAP, earlier this year about the iPad and the future of competing Android tablets in the enterprise he told GottaBeMobile that “Android is playing an important role.”

Now, six months later at IFA 2011 in Berlin, we’re starting to see the role that tablets, like the Samsung Galaxy Note, might play in an enterprise setting. Here’s abrief demo of the SAP Business Objects Viewer running on the Android-powered Galaxy Tab Note.

Apps like this provide real time access to terabytes of data. Instead of telling other meeting attendees to wait for you to email them more granular data or additional information, you could pull out your Samsung Galaxy Note or Android tablet and use the SAP app to access and drill down to additional information. 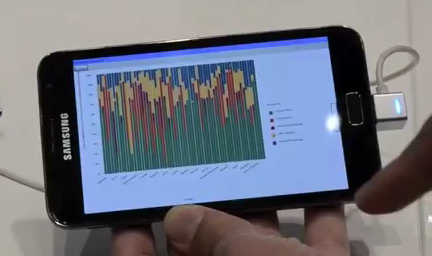 The Galaxy Note is a 5.3″ tablet device that Samsung introduced at IFA 2011.