Yesterday, Samsung’s mobile division unfurled its first Super Bowl advertisement. The lengthy advertisement was for the upcoming launch of the Samsung Galaxy Note on AT&T’s 4G LTE network, a device that is part smartphone and part tablet. Truth be told, it’s one of the most unique and most talked about mobile devices in recent memory and Samsung is obviously trying to capitalize on the buzz.

And while the advertisement was full of celebrities and music and hate for Apple, it didn’t feature a lengthy rundown of the Galaxy Note itself.  Sure, there were some specifics in there but we have no doubt that the commercial left plenty of people confused about the device Samsung is calling “The Next Big Thing.”

So, we wanted to run down everything we know about the Galaxy Note which we hope will then help you make a more informed decision on whether or not you want to buy AT&T’s hybrid device, a device that we gave our award for Best Versatile Mobile Device at CES 2012. 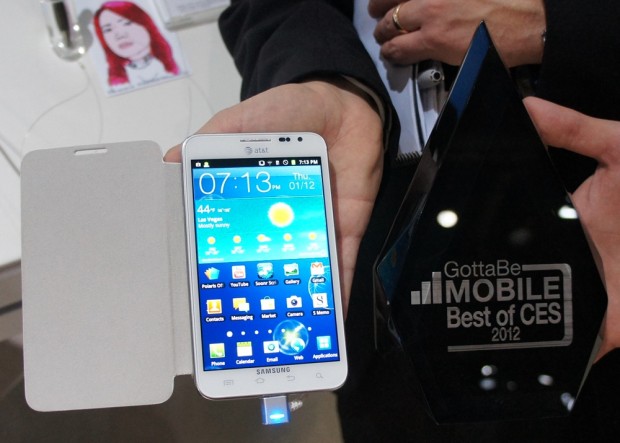 The video below is a quick hands-on video from CES 2012 which will give you a good look at the Samsung Galaxy Note’s design and the software that comes along with it.

By far, the Samsung Galaxy Note’s hardware is what sets it apart from the rest of the Android pack. On a very basic level, the Galaxy Note is a part phone and part tablet. We say that because it will allow you to make calls or text like a normal phone would but it also boasts a screen that is 5.3-inches, Super AMOLED no-less. That’s way bigger than any other smartphone on the market including the the 4.7-inch display on the HTC Titan II, also for AT&T.

The Super AMOLED component of the display will ensure rich colors and a high-quality experience in well-lit environments.

Samsung’s Galaxy Note also features a speedy 1.5GHz dual-core processor that should be handle just about anything the average user will throw at it – web browsing, apps, you name it, and it also features a massive 2500 mAh to help get users through a day on AT&T’s relatively new 4G LTE network.

It also features 32GB of built-in storage – for your photos, music and apps, a solid 1GB of RAM to help you multitask, and two cameras. An 8MP rear camera and a 2MP front-facing camera for video chat purposes.

And yes, it’ll have Bluetooth 3.0, Near-Field Communication (NFC) for use with services like Google Wallet, and GPS.

In addition, it will feature a stylus called the Samsung S-Pen which you can see in action in the video below:

What the S-Pen allows you to do is write directly on the Galaxy Note’s screen. Notes, reminders, etc, all in your own handwriting.

The Galaxy Note is a 4G LTE device for AT&T. That means that you’ll get speeds that are up to 10 times faster than normal 3G speeds if you’re in an area covered in LTE. Unfortunately, at the moment, AT&T only has a limited number of LTE markets here in the U.S.

If you live outside one of those cities, you’ll have to use the Galaxy Note on AT&T’s HSPA+ 4G network which, while still faster than normal 3G, is much slower than the carrier’s 4G LTE data speeds.

While the latest version of Android out right now is Google’s Android 4.0 Ice Cream Sandwich, an operating system that supports both phones and tablets, the Galaxy Note is going to be powered by an earlier version of the operating system in Android 2.3 Gingerbread with Samsung’s TouchWiz interface over the top. Unfortunate, but that’s reality.

At CES 2012, we asked Samsung about the timetable for an upgrade to Android 4.0 and rather surprisingly, we were greeted with shoulder-shrugs and uncertainties. Far different then the “coming soons” that we got for other devices at the conference.

Luckily, Samsung a few days ago confirmed Android 4.0 for the Galaxy Note in 2012 for sometime before the end of Q1.

As we’ve said, the version of Gingerbread on the Galaxy Note has support for the S-Pen stylus which means that it comes pre-loaded with a number of apps that will be optimized for the S-Pen.

One of them is called S-Memo which is exactly what you think it is. A memo pad where you can scribble down anything – doodles, class notes, important information from a meeting, all with your stylus.

Fortunately, AT&T and Samsung made the release date for the Samsung Galaxy Note official just a few days ago and it will arrive later on this month on February 18th.

And, for those of you that can’t wait, the Galaxy Note is up for pre-order at AT&T and Best Buy.

The Galaxy Note price on AT&T, like the release date, is set in stone. AT&T is going to be asking for $299.99 on-contract for the Galaxy Note. That’s a bit more then its asking price for the other 4G LTE phones on its network but again, this isn’t your typical smartphone.

Plus, you’ll get the stylus.

Keep in mind, AT&T recently changed its data plans. The carrier operates on a tiered data platform and it currently offers three options:

Choosing one can be difficult so you’ll want to take a look at your texting, calling, and data habits before you sign your name on the dotted line.