A few days ago, Samsung confirmed that the Galaxy Note, its 5.3-inch hybrid device, would be coming to the United States at some point in the future. And with CES just a week away, whispers are swirling about a possible launch on AT&T in and around this year’s event. Well, to hold you over until a possible announcement, a photo of the Galaxy Note – of the official variety, has popped up clearly showing off Ma Bell’s branding.

This should dispel any doubts any of you had about where the Galaxy Note might be headed once it finally reaches the shores of the U.S.

You’ll also note that the render mentions UCLA so it’s pretty clear that this is the device that we should see unveiled sometime in the weeks ahead.

The fact that it’s launching on AT&T shouldn’t surprise you. We’ve already seen it pass through the FCC in the past with bands for AT&T. And while it hasn’t reached the shores of the U.S. yet, it has been a bit of a hit elsewhere in the world. 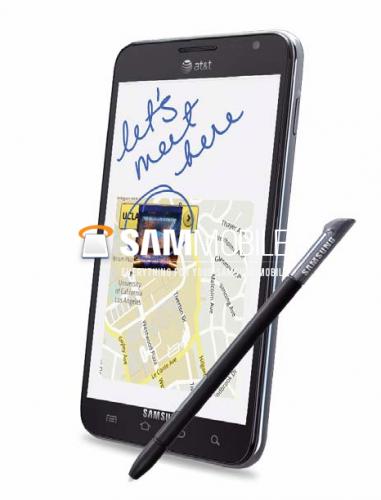 After being on the market for a mere two months, Samsung recently announced that it had shipped over one million units. Not bad for a device that has a display that is in-between most tablets and smartphones.

Speaking of specifications, the Galaxy Note will sport Android 2.3 Gingerbread and comes with a dual-core 1.4 GHz Exynos processor. It also has a micro SDHC card slot for expansion and either 16 or 32 GB of internal storage space.

It should also have support for AT&T’s 4G LTE network.