Those of you living in Canada will be elated to know that the phone-tablet hybrid called the Samsung Galaxy Note has touched down on three different carriers. The three include the usual suspects,  Bell, Rogers and TELUS and all three currently have the device on sale for those looking to snag it with a contract and even for those that are looking to avoid handing over a signature.

The Samsung Galaxy Nexus that’s launching in Canada mirrors the device that will be hitting AT&T’s network in just a few short days.

For one, the specs are the same and two, most importantly, the Canadian version has support for 4G LTE. This means that you’ll be able to attain speeds that are up to ten times faster than those on a regular old 3G network. 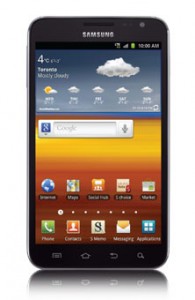 Those of you who love taking your gadgets with you on-the-go will appreciate those high speeds. And with the Galaxy Note, you’ll likely be finding yourself bringing it out of the house quite a bit.

That’s because the device is both phone and tablet.

It also won our Best Versatile Mobile Device at CES 2012.

In any event, it features an absolutely massive footprint, starting with its 5.3-inch display which will be Super AMOLED in nature. That means that you’ll get  rich colors on websites and media content while also enjoying a high-quality experience in well-lit environments. Like the outdoors.

The Galaxy Note also features a 1.5GHz dual-core processor and 1GB RAM which will be able to handle just about anything you throw at it. It also has 32GB of built-in storage for your music and apps, and two cameras – 8MP on the back and 2MP in the front, which will handle your photos and video-chatting.

It’ll be coming with Android 2.3 Gingerbread as its operating system but it will be upgraded to Android 4.0 in the future.

And let’s not forget, the most interesting aspect of the Galaxy Note has to be the Samsung S-Pen stylus which allows you to write directly on the screen. The stylus and the screen size are what sets the Galaxy Note apart from the rest of the Android pack.

While this is for the AT&T version, this video should give you a good idea about what to expect from the Canadian version of the Galaxy Note:

For those of you in Canada that are interested, you can find the Galaxy Note at Bell here, Rogers here and TELUS here.