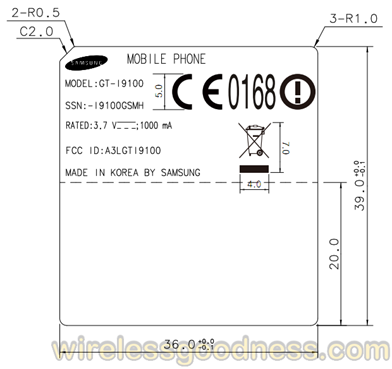 The model being seen at the FCC is also referred to as the GT-I9100, and has support for AT&T’s wireless spectrum suggesting this model may be headed to AT&T. While phone-makers often seek regulatory approval, FCC sightings do not necessarily indicate that the handset will make it to launch, either via a carrier–in this case, AT&T–or in unlocked form. However, as AT&T carried the original Galaxy S in the form of the AT&T Captivate variant, it is likely that the carrier may carry the successor to the Captivate, perhaps re-badging it as the Captivate II at launch, though that’s purely conjecture at this point.

Another 4G Android smartphone made by Samsung that was announced for AT&T is the Samsung Infuse 4G, which will share the updated Super AMOLED Plus display with the Galaxy S II.

Rival national GSM carrier in the U.S., T-Mobile, recently launched an updated version of its own Galaxy S variant, though that model isn’t the upgraded Galaxy S II. T-Mobile had updated its T-Mobile Vibrant, its variant of the original Galaxy S, with a model called the Galaxy S 4G, which supports the carrier’s HSPA+ network for faster mobile broadband speeds. That model is seen as a modest improvement, delivering faster mobile broadband speeds and comes with the inclusion of a front-facing camera for video calls.