According to SamMobile, Samsung Denmark has made a post on Facebook that seems to show off Android 4.1 Jelly Bean timelines. The company claims that the Galaxy S II Jelly Bean update, which was not confirmed along with other devices at the Unpacked event in August, will be rolling out at some point during the month of November.

Oddly enough, two of the devices that Samsung announced would be getting Android 4.1 Jelly Bean very soon, the Galaxy Note and Galaxy Note 10.1, have yet to receive any sort of release window.

We also see again that the Galaxy S III Jelly Bean update is slated for a release in October but also listed is November which is a bit curious as well. 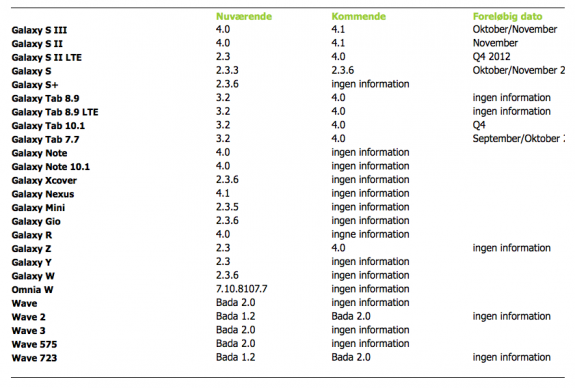 The Galaxy S II Jelly Bean update may roll out in November.

Here is what Samsung Denmark says about the table, translated from Danish:

In the table below you will find information about current and future updates to the operating system in Samsung
smart phones and tabs. Samsung Denmark continuously update information, so you always have an overview of the latest
software.

Please note that all dates are tentative and are smart phones and tabs that are not locked to the respective operators.
Smartphones and loss, the operator locked will typically update a few weeks later than the time specified here
on the page. Samsung Denmark may also not [unknown word] more detail about when updates are available
or any plans for future updates.

At this point, based on the fact that the Galaxy Note information is missing, the table should be taken with a grain of salt, even if it’s coming from an official arm of Samsung. It’s extremely odd that the company would boldly proclaim a Galaxy S II Jelly Bean date like this without at least offering some information about the two Note devices.

Obviously this is fantastic news for those that own the Galaxy S II as it at least seems that the Android 4.1 Jelly Bean update will be rolling out for the device, it’s now just a matter of when.

Of course, users in the U.S. should not expect their Galaxy S II device to see the update roll out in November. Major Android updates often roll out to unlocked devices first and then to devices in regions other than the U.S.

Instead, Galaxy S II owners in the U.S. should be hoping that the updates roll out in 2013, if at all.  From the looks of things though, it appears that there is a pretty good chance of that happening.