Finally, we have some sort of official day to look forward to in regards to the Samsung Galaxy S II that has had a long road to launch day in the United States. Sadly, the day is probably further away than most of you hoped for with Samsung sending out invitations for an event that is presumably having to do with the Galaxy II’s launch in the United States.

The invite, of course, doesn’t explicitly say that the event/announcement has anything to do with the Galaxy S II but judging by the ‘II’ in the bottom left corner of the invite and from the fact that this is a ‘major product announcement’ I get the feeling that it is. August 29th is when this thing is going down and I have a feeling that devices won’t be on shelves that day. 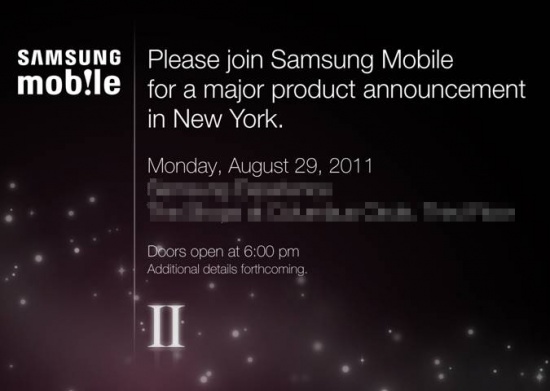 Many of you out there have been hoping that the Galaxy S II would be out in August. However, from the looks of things, an August 29th announcement probably means that devices won’t hit shelves until September. I can’t remember the last time an announcement and launch took place on the same day, folks. Can you?

So, it’s looking like the Motorola Droid Bionic’s release in September isn’t going to be such a bad thing after all, well, unless Samsung miraculously launches devices on the day of the announcement.

Anyone going to be holding out for a September launch?