A short time ago, we learned that the Samsung Galaxy S II would be making its way to the shores of the United States at some point in August. And while we still have no idea, officially, what carriers the device will land on and what it will look like when it does, those of you seeking official information on the device now have a way to do so. DroidMatters has discovered that the Galaxy S II’s U.S. sign up page is now live. That means that if you head here, you can toss your email and information into Samsung’s database and get information as its sent out. Of course, we’re going to be bombarded with leaks in the near future so this sign up might not do you much good. But if you don’t keep up with the blogs, then this is probably a good way to get info. 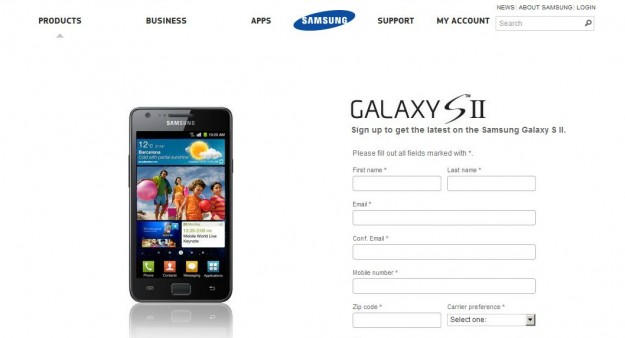 Now, there is something interesting at the bottom of this page. If you look closely, you’ll see that Samsung has put a little disclaimer down towards the bottom of the page that reads:

Global Galaxy S II device shown. Screen images simulated. Appearance of device may vary. Some features may not be available in all areas.

This of course just further confirms the probability of different variants of the Galaxy S II for different carriers. We’ve already seen not one but two AT&T devices and we’ve also gotten a glimpse at Sprint’s WiMax 4G model as well and they all have something different to bring to the table.

Exciting stuff to be sure.