The Samsung Galaxy S III is a popular choice in the U.S. and in the UK, but a small number of users continue to wait for the 64GB Galaxy S III model Samsung promised at launch.

Clove is not accepting preorders for the 64GB Galaxy S III yet, as it is waiting for confirmation on pricing. The company offers an email sign up for notifications. 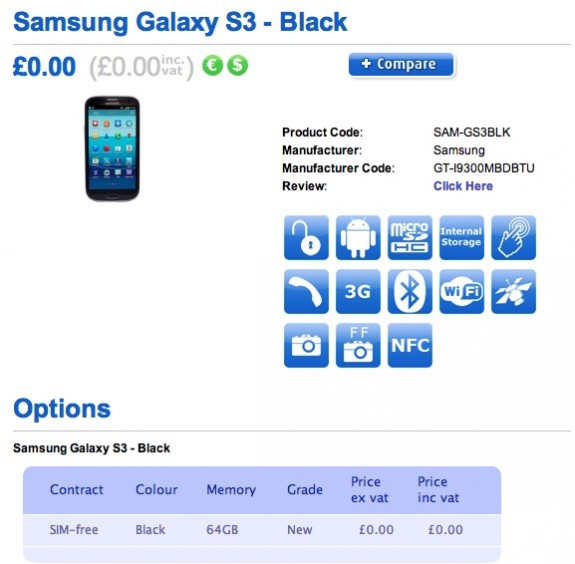 The Samsung Galaxy S III 64GB should arrive in October.

Retailers originally offered the 64GB Galaxy S III for preorder, but cancelled preorders in July. After concern that Samsung cancelled the 64GB model, the retailer confirmed that it would ship sometime in the second half of 2012.

The Galaxy S III 64GB model looks exactly like the current models, and boasts the same specs. The only thing different is that it now has more memory and it took its sweet time getting here.

As GottaBeMobile Editor Adam Mills observes, this launch is too late to be of any consequence. Yes, the Galaxy S III is a great phone, but many of the users who want this much storage have likely purchased the 32GB model and installed a MicroSD card to increase storage.

The Galaxy S III with 64GB of storage will likely never hit Verizon, Sprint, AT&T and T-Mobile in the states. Expect retailers like Clove.co.uk and others to sell it online to users who held out for more storage space. Interested shoppers in the U.S. can likely pay a premium to buy the device for use on AT&T or T-Mobile when it goes up for sale.

The Galaxy S III with 64GB of storage will face off against the iPhone 5 and the Galaxy Note 2 when it releases in October. This model will also face off with the expected launch of the next Google Nexus device later this year.