Samsung finally took the stage in London and announced its latest Android smartphone, the Samsung Galaxy S III. The company also revealed when consumers in the United States should expect the device saying that a 4G LTE version of the phone would be hitting North America in the summer.

This means that the Galaxy S III will launch in a relatively similar fashion to the Samsung Galaxy S II which saw the same kind of staggered launch.

Samsung has announced that the Galaxy S III will first be hitting Europe at some point this month, it declined to give a specific date, and that a 4G LTE model would hit North America, Japan and Korea in the summer. It will hit the U.S. in June. 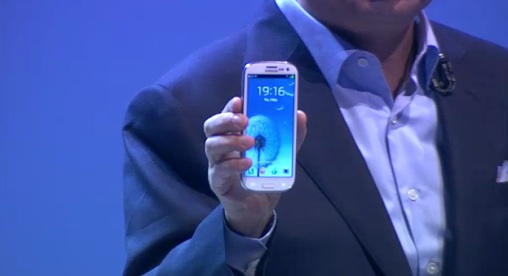 Again, Samsung didn’t provide any sort of specific date for the phone’s release which means that it will probably differ based on carrier.

As of right now, only two carriers have confirmed the device. Vodafone UK and O2 have already said that they will be carrying the Samsung Galaxy S III.

No American carrier, as of yet, has announced that it will play host to the new Galaxy smartphone. That’s not to say that none of them will get it though.

AT&T, Sprint and T-Mobile all carried the Galaxy S II and Verizon offered and still does offer the Samsung Galaxy Nexus. Verizon is currently the only American carrier that has been rumored to be getting the new Galaxy S III.

The new Galaxy S III features a massive 4.8-inch Super AMOLED HD display, a 1.4GHz quad-core processor that will likely be dual-core on the 4G LTE model, an impressive 8MP camera with loads of features and a massive 2100mAh battery.