There has been a lot of back and forth about the size of the display on the Samsung Galaxy S III and it appears that we may have finally gotten some closure.

KnowYourMobile has leaked a photo of what is purportedly a photo of the elusive Samsung Galaxy S III. The device is placed against a ruler revealing a length of 130mm.

The report also concludes that the screen size of the Galaxy S III will be 4.8-inches, a size that we saw pop up in a leaked manual last week, and not 4.7-inches or 4.6-inches, two sizes that had been mentioned in the past. 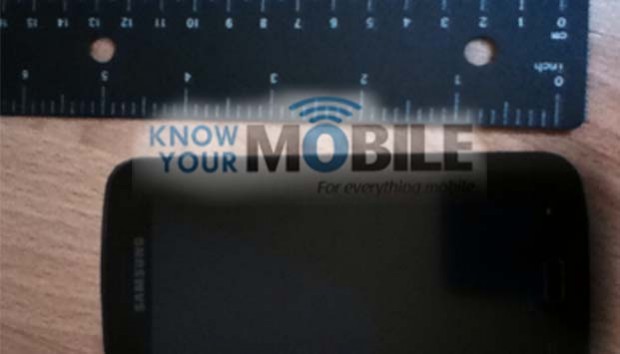 As for the phone itself, it appears to be similar to the Samsung Galaxy Nexus, a device that was launched in December 2011 and does not feature any hardware buttons.

The device here is clearly lacking those.

As of right now, those interested in the device should take this new information with a grain of salt. There have been numerous leaks surrounding the upcoming “Next Galaxy” from Samsung and the only thing that the company has been willing to confirm is that at least one version of the phone will sport a 1.4GHz quad-core Exynos processor.

We’ve heard that that might just be on the international version of the phone with a 4G LTE model apparently coming with a dual-core Snapdragon S4 processor instead.

Other rumored specifications include 1GB of RAM, an 8MP or 12MP rear camera, Android 4.0 Ice Cream Sandwich, a thin design that is possibly ceramic in nature, and a massive 2050mAh battery.

Samsung has been using dummy Galaxy S III units in public in order to disguise the device and one such device can be seen in the video below.

Security around the phone is said to be so tight that those close to the launch of the device don’t even know what it’s going to be called.

The company will be announcing the device on May 3rd in London and we likely won’t know exactly what the Galaxy S III is all abut, if it’s even called that, until then.