The Samsung Galaxy S III Jelly Bean update will be coming to the United States “soon,” this according to Samsung who has launched its usual Android upgrade schedule which at the moment is quite barren.

The update page lists devices that have already received the upgrade in the Verizon Galaxy Nexus, Sprint Galaxy Nexus and Sprint’s Nexus S 4G. It also lists one other device set to get Jelly Bean as well.

The Samsung Galaxy S III is listed under AT&T, Sprint, T-Mobile, U.S. Cellular and Verizon and it’s Android 4.1 Jelly Bean update is said to be coming soon to all five carriers. 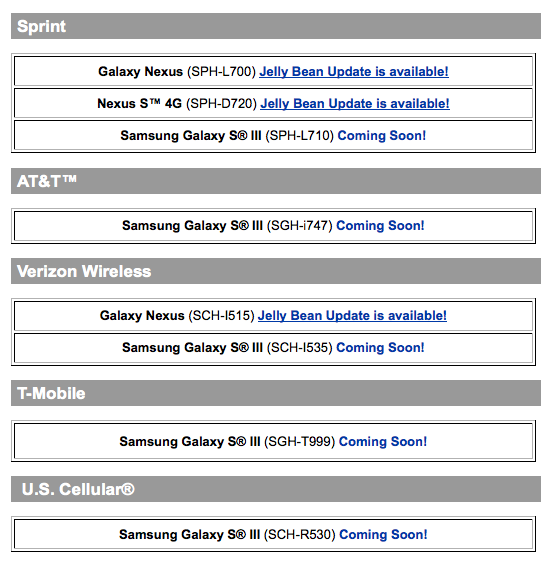 We know that Jelly Bean already started rolling out for the international Galaxy S III but this is the first time we’ve gotten word about the U.S. versions of the popular smartphone.

Of course, coming soon could mean a variety of different things. It could mean that yes, it’s actually coming soon, like this month. Or, it could mean that it’s coming at some point in the future, maybe a few months from now. It’s never easy to decipher that kind of terminology when it comes to a manufacturer.

However, Samsung said soon for the Galaxy S III roll out back in August and it kept its word by rolling it out in September. So hopefully that translates to the Galaxy S III Jelly Bean roll out in the U.S. as well.

Unfortunately, the Galaxy S III is the only Samsung phone other than the Nexus devices that’s listed. Samsung recently confirmed Jelly Bean for a number of devices including the Galaxy S II and Galaxy Note, both of which are available in the United States, but neither are listed on the schedule which could mean a long wait.

Samsung will be adding more devices to the schedule as time goes on so we’ll be keeping an eye out and letting you know what Samsung has cooked up for Galaxy owners.

Android 4.1 Jelly Bean is a huge improvement over Android 4.0 Ice Cream Sandwich and it’s an update owners should be looking forward to. In addition to the faster and smoother UI, it will also bring an improved calendar, browser, notifications, camera application and more.