Samsung Galaxy S III owners who can’t hold out for the official Android 4.1 Jelly Bean roll out can install a leaked version of the software today.

Yesterday, the Galaxy S III Android 4.1 Jelly Bean update appeared on camera, though, at the time, there was no way of installing the leaked software. Today though, that changed as the software is now available to download after root and following a number of different steps.

SamMobile has provided a way for owners of the international version of the Galaxy S III, that’s model number I9300, with a way of getting the official (yet unofficial) piece of software on board the device. 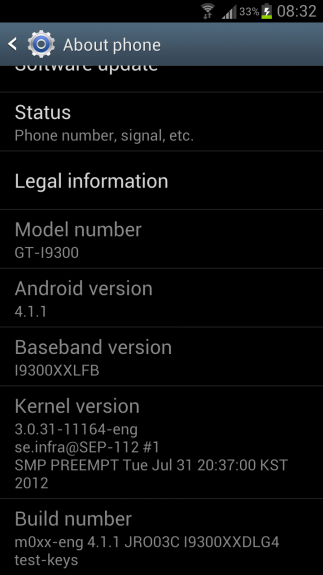 This is not the official Android 4.1 Jelly Bean update but rather a pre-release version of the software. This means it’s likely not the software that will be rolling out a future date, rumored to be August 29th, and it will void the warranty on the device.

That being said, it’s available for consumption for those who wish to take the plunge. This software comes with some new features on board including the ability to palm swipe to take a screenshot, new live wallpapers, Google Now, and most if not all of the rest of the features coming with Android 4.1 Jelly Bean.

So, for those that want Android 4.1 Jelly Bean early, this is certainly a route to consider. Those who do decide to attempt to install the software should definitely back up any important files on the device prior to update to the ROM.

Average users and those who aren’t familiar with rooting or flashing ROMs will want to hold out for the official update to arrive.

Fortunately, rumors point to the Galaxy S III Jelly Bean update as rolling out on August 29th, the same day that Samsung plans to unleash the Samsung Galaxy Note 2.

Samsung itself is mum on a specific release date so August 29th is currently as good of a day as any.