The update that came to the surface last week apparently had several restrictions in regards to firmware and carriers. The version that has leaked out courtesy of SamMobile apparently does not have those restrictions and can be downloaded and installed by anybody that owns the international version of the Galaxy S III.

Those who own the Galaxy S III with the model number III GT-I9300 are the lucky recipients of the update. Those who are on other versions of the device need to wait. 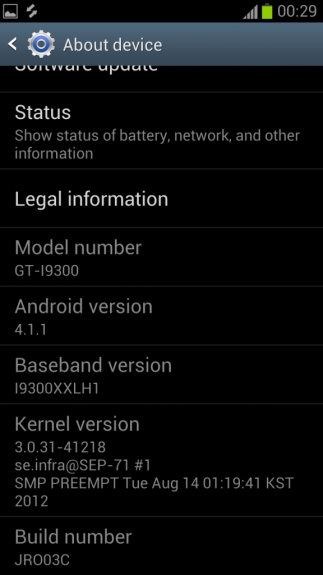 Before diving in , there are a few caveats that owners should know. First, this is test firmware. That means that it may or may not be the final version that rolls out to the Galaxy S III. The official update will likely roll out through Samsung Kies. It’s rumored to be doing so on August 29th.

Second, owners will lose their warranty if it’s installed. Those who are prone to dropping phones or breaking their device might want to hold off for the official roll out.

Third, the update requires users to be rooted and have some knowledge about installing ROMs. Those who aren’t knowledgeable about these things will want to hold off and wait for the official update which again is rumored to be out August 29th, the same day as Samsung will introduce the Samsung Galaxy Note 2.

Now, keep in mind. This is for the international version of the Galaxy S III. This update will not work with American variants and we don’t expect the software to roll out for American versions of the device on August 29th.

Instead, owners of the devices on AT&T, Sprint, T-Mobile, Verizon and U.S. Cellular will likely have to wait longer for the Galaxy S III Jelly Bean update.

We have heard that the Verizon Galaxy S III update is close, but we just don’t know how close.

We’ll be on the look out.

For those that wish to take the plunge, here are the instructions: