The evidence comes courtesy of GSMArena and it depicts an internal inventory screen from Carphone Warehouse, a retailer based in the United Kingdom. The screenshot reveals not only the possible ‘Galaxy S3’ moniker for the next phone but also that it should be arriving in two colors. 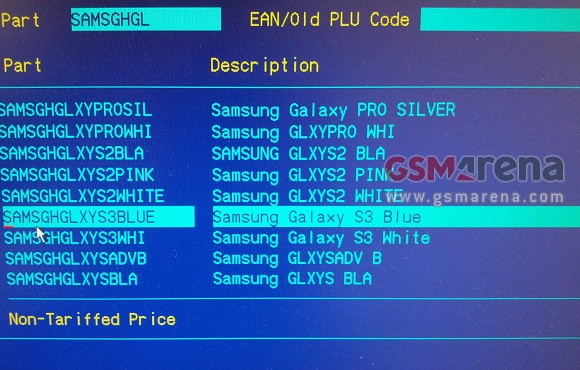 This is the second time that we’ve heard blue and white for the Galaxy S III so it’s pretty safe to assume that this is going to be the case.

Even though this leak confirms something that we’ve heard before, we’re going to have to wait until tomorrow’s announcement in London to find out for sure.

That’s because Samsung has done a fantastic job of keeping this device under wraps until its official unveil.

The only detail that Samsung has confirmed thus far is that the ‘Next Galaxy’ has a 1.4GHz Exynos quad-core processor on board. And even then, there are still some stones that are unturned.

Apparently, Samsung will release two versions of the Galaxy S III. One with a quad-core processor, and one with 4G LTE capabilities that sports a Qualcomm dual-core S4 Snapdragon processor.

Qualcomm’s S4 can be seen in action against a quad-core processor in the video below.

HTC did something similar with its release of the HTC One X.

However, at this point, the device, even it’s name, remain shrouded in mystery.

Fortunately, we won’t have to wait long to find out what Samsung has up its sleeve because tomorrow is May 3rd, the date that Samsung will officially show off its new device to the world.