Earlier this year, a Samsung device with model number SGH-T999 came to the surface and while it has been speculated to be many things, new evidence suggests that it is likely the Samsung Galaxy S III for T-Mobile.

The model number was spotted in a video over at Android Police, courtesy of TMoNews, during a hands-on with the Galaxy S III. At around the 5:53 mark of the video, during a demonstration of the device’s AllShare feature, model number SGH-T999 can blatantly be seen amongst a list of Galaxy S III variants.

For reference, the Galaxy S II for T-Mobile had a model number of SGH-T989. 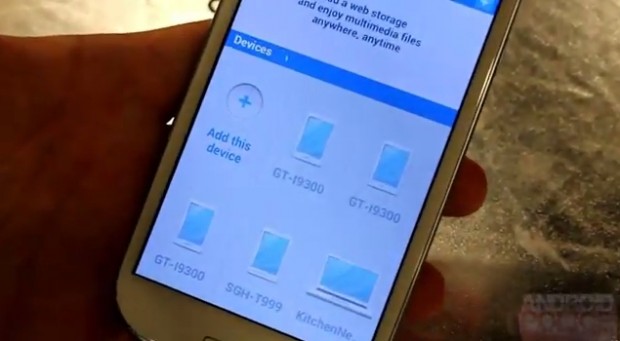 Clearly, this isn’t concrete evidence of a T-Mobile Samsung Galaxy S III’s existence but it’s a pretty good sign that the device is likely headed to T-Mobile’s HSPA+ network sometime in the future.

This shouldn’t come as much of a surprise to anyone. T-Mobile is clearly in need of a new flagship phone from Samsung to compete with the iPhone 4S and the Galaxy S III might just be the phone to do it.

T-Mobile doesn’t have a 4G LTE network and instead rocks an HSPA+ network. That means that the T-Mobile version of the phone might be toting a Exynos quad-core processor rather than the dual-core processor that’s expected to be inside the 4G LTE models of the Galaxy S III that will be heading to U.S. carriers that support the high-speed network.

AT&T, Sprint and Verizon, which all have 4G LTE service, have all been rumored to be getting the device. And while that puts T-Mobile at a disadvantage, having a quad-core processor might lure some consumers in, especially ones already on T-Mobile.

The Samsung Galaxy S III won’t be hitting the U.S. until June and thus far, no American carrier has confirmed that it will be playing host to the device.