The new leak comes from German site Mobile Geeks which has a photo of the device along with detailed specs. The image shows the 4-inch version of the Galaxy S III in white with what looks like redesigned soft keys below the screen. Otherwise the Samsung Galaxy S III Mini looks just like its bigger sibling.

The 4-inch screen on the Galaxy S III Mini is an AMOLED display with an 800×480 resolution, and it’s likely a PenTile display. The phone will run Android 4.1 Jelly Bean like the Galaxy Note II and use an ST-Ericsson 1GHz dual-core processor. Inside it will also include 1GB of RAM and 16GB of internal storage. 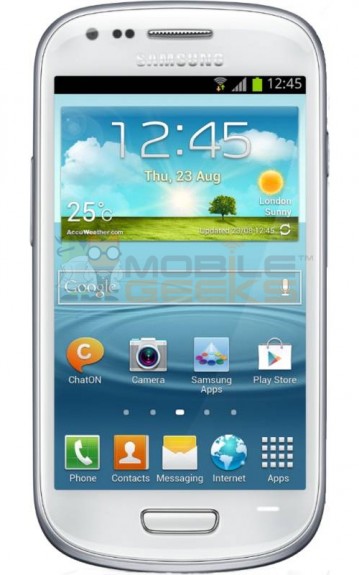 According to the leak the Galaxy S III Mini will sport a 5MP rear-facing camera, a front-facing camera (no additional details given), NFC, a microSD card slot, and a 1500mAh battery.

Not everyone considers a 4-inch smartphone “mini,” but it’s nice to see Samsung embrace the Galaxy S III name. If the phone reaches the U.S. it might get a new name, but there are no details about a U.S. release of the Galaxy S III Mini.

With this new phone Samsung is getting a lot of mileage out of the Galaxy S III design. It also used the same industrial design on the Galaxy Note II and the ATIV S. It’s great that Samsung found a design language it likes, though some Galaxy S III owners wish it used less plastic.