Eldar Murtazin is back with another bold prediction and this time it’s in regards to the Samsung Galaxy S III which he says will be arriving at some point during the month of April with some impressive specifications on board. If you’re not familiar with Murtazin, just know this. He’s extremely hit or miss so take this information with a great big pinch of salt.

Apparently, Samsung is going to be announcing the Galaxy S III at the Mobile World Congress next month in Barcelona and it will be released at some point in April of this year. If true, it would mirror Samsung’s launch of the Galaxy S II which was announced at MWC and arrived in Europe in April.

And if that’s the case, those of you in the United States should not expect it to launch in April. You can blame the carriers for that.

Now, he also delves into some of the rumored specifications. 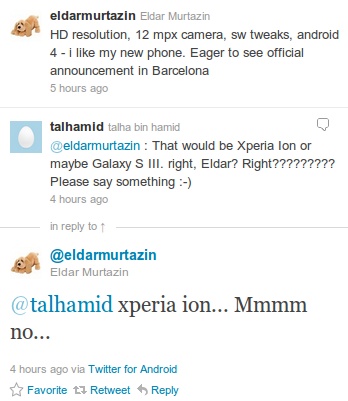 The Galaxy S III apparently has an HD resolution display, Android 4.0 Ice Cream Sandwich which will supposedly have some software tweaks – we’re guessing that means Touchwiz, and it’s also rumored to have a 12MP camera.

In addition, Murtazin says that it has a quad-core processor on board that will be clocked at 1.5-1.6GHz. The processor type is not revealed.

None of those are out of the question really considering what’s come out and what’s on the horizon in terms of smartphones. And it should be no surprise that Samsung is working on a monster.

After all, the Samsung Galaxy S II is  arguably one of the best phones ever made.

So, let’s hope this rumor holds up and we see a debut next month. Right?