The Samsung Galaxy S3 or Galaxy S III isn’t expected to make its debut until May 3rd but it appears that the device’s specifications have been all but confirmed by an AnTuTu benchmark.

If the benchmark is legit, the Galaxy S III absolutely blows away the competition in terms of performance even topping the Asus Transformer Prime tablet, a device that sports a Tegra 3 quad-core processor. 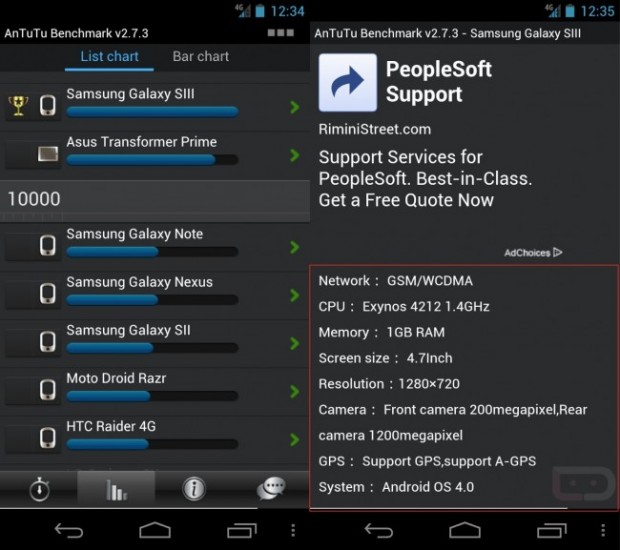 Read: How to Watch the Samsung Galaxy S III Event.

In addition, the benchmark seems to confirm some of the Galaxy S III specifications that consumers have been waiting for. Again, if these benchmarks are the real deal, the device that Samsung is launching on May 3rd should boast a a 4.7″ HD display with 1280×720 resolution, a 1.4GHz Exynos dual-core processor, a 2MP front-facing camera, a 12MP rear camera, 1GB of RAM, and Android 4.0 Ice Cream Sandwich.

These are similar to specifications that have surfaced before, save for one thing.

The Exynos 4212 is a dual-core processor and not quad-core. The Galaxy S III has been rumored to have a quad-core processor so it’s unclear at this point what exactly will be on-board.

Interestingly, the device benchmarked here supports GSM/WCDMA and not 4G LTE. That doesn’t mean a 4G LTE device won’t be coming but it does mean that specs could change on the 4G LTE model like they did with the HTC One X.

So, it appears that all that remains to leak out is the device itself. We’ve seen some possibilities but it’s unclear if we’ve actually seen the Galaxy S III show up in the wild as of yet.

Unfortunately, we probably won’t know for sure until May 3rd rolls around.

So far, the device has been confirmed for two UK carriers, Vodafone and O2, however, other carriers including those based in the United States, have remained mum.